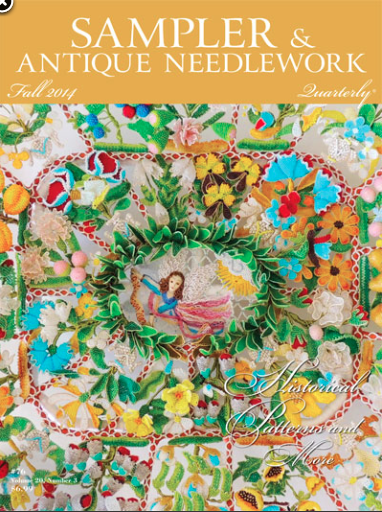 This new issue of Sampler and Needlework Quarterly features an article about 17th century beaded baskets I wrote as well as photos of historic pieces and it features Rachael Kinnison's amazing basket (for the contest I ran earlier) on the front cover!!

If you are interested in a copy, SANQ sells single copies on their website OR you can sign up for a subscription and get the current copy free plus the next four.  Go to their website for more info:  http://www.sanqmagazine.com

Congratulations Rachael on making the cover!!

If you want to see Rachael's newest ventures in 17th century beadwork, you can follow it on her blog:  http://ladysrepositorymuseum.blogspot.com.  She is making an authentic jewelry case like Martha Edlin did along with her casket.  Scroll down for the King - he is amazingly done!

Tricia
Posted by Thistle Threads at 8:00 AM 6 comments:

Eye of the Needle Exhibition

Wow - I have been wanting to blog about this wonderful exhibition for two weeks but have been stymied by a massive computer problem while traveling.

Mary did a fantastic job of picking from the collection and organizing them.  Some of the pieces just blew me away, including the needlelace sampler worked in colored silks and silver threads.  Speaking to Mary at the opening, she was particularly happy with how it was hung.  She insisted in lowering the pieces 18" lower than the museum regulations so that "short women" could see every part of the
piece up close.  I have to admit that at first I didn't realize that was why I felt like I could see everything so well - but that was just the trick!

My recommendation on this one is that if you can - go.  Swim across the pond if needed.  Mary's goal was to revive interest in 17th century embroidery in England and was inspired by the Bard exhibition by the MET to overwhelm with stunning pieces.  It succeeds!

The exhibit is open until October 12th.  Timed tickets are needed to enter the exhibition, but once in, you can go back in all day.  It will take a few hours to really absorb it.  One thing I wish I had done was buy a second copy of the Feller Book (Volume 2) and take notes in it next to the pieces as photos aren't allowed.

And if you go, remember to stop in Witney at Witney Antiques (30 min away) to look at the selection of samplers and 17th century embroidery there.  Always stunning pieces from coifs, nightcaps, mirrors, and pictures to be viewed.  And taken home if your account has enough shekels left in it!

Posted by Thistle Threads at 3:18 AM No comments: