One of the things that attracted me to embroidered caskets was that they were full of other artisan produced items and I love knowing how everything and anything is made.

It has been so fun to learn about marbled paper and look at the designs that were made in the 17th century as well as search out papers and artisans.  I spent time in a studio in Florence and one in Venice in the last few years.  My new marbler is out of Nice and I was planning on visiting this year but now that won't happen.  He let me know yesterday that the studio is part of his home so he is still producing and healthy (Phew!!).

Here is a wonderful video about how different patterns are made for marbled papers, you can get lost in watching the zen like patterns.

Posted by Thistle Threads at 8:00 AM 2 comments:

Woodworkers, Makers, and those who Sew - Give up Your Gloves and Masks Locally

So please focus on calling that woodworker, contractor, dentist, hairdresser, etc you know and get them to pull out dust masks and gloves.  And start wearing your mask, make it a fashion statement.  I might embroider the edges of mine.
Posted by Thistle Threads at 2:26 PM 2 comments:

There is an embroidered casket for sale this weekend on auction.   It has certainly seen much better days but it amazingly has its bottles, inkwells and even a good print in the inside.

It is lot 945 at Hutchion Scott Limited in Skipton, UK. The auction is on March 27th.  I can't quite tell which story is on this casket and the back is in somewhat better condition than the front.  There are more pictures of the casket online if you look.

Again - if you get it - you owe me some great pictures!! 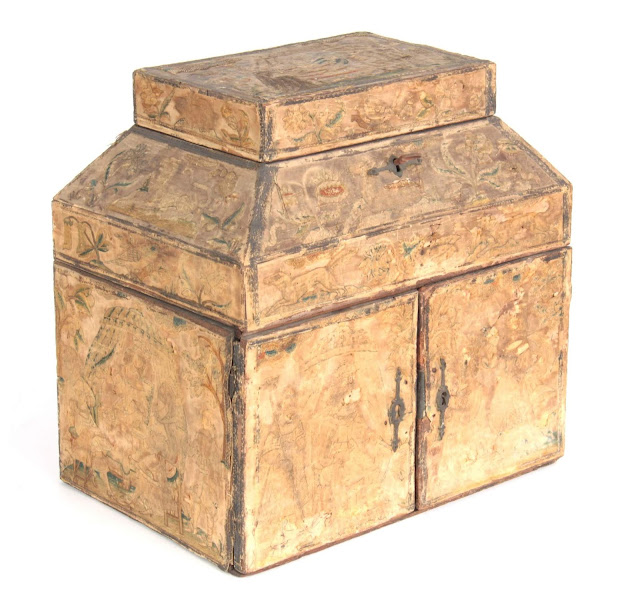 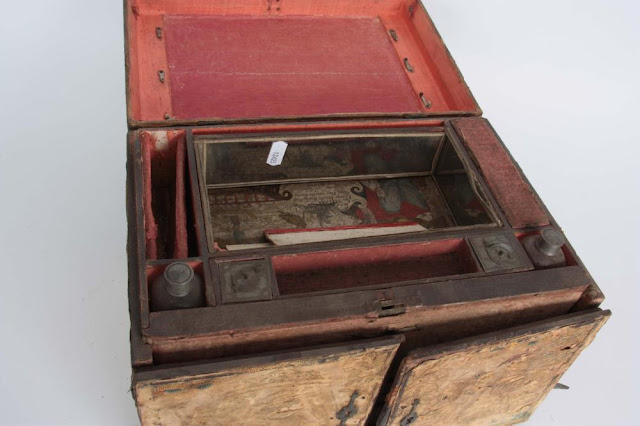 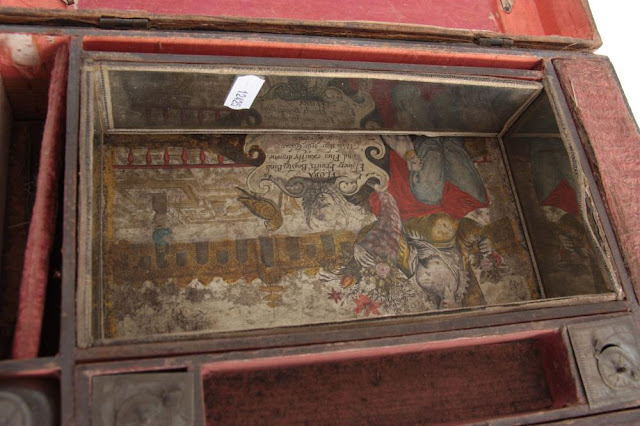 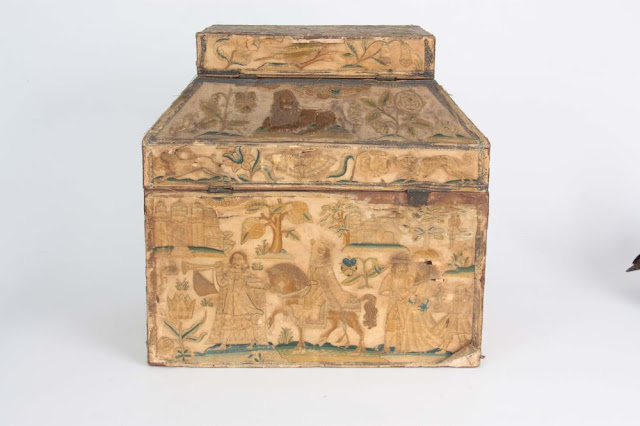 Posted by Thistle Threads at 9:05 PM No comments:

This morning, my youngest son greeted me with:


I hope you understand that reference (MarkWatney from The Martian - a family favorite - watch it).

As a mother I had to laugh as well as totally appreciate the sentiment and humor he was finding in the situation.  We have been self isolating as a family now since March 12th.  We had foreseen that it was  coming and had been taking precautions and had a family plan that we pushed into action.  The trigger was when the public schools closed in our town. We had developed a 4-week food plan, shopped for the 'dry goods' and both my husband and I had the list and would rush out to fulfill the moment the trigger occurred.  I was taking a short break as I had just moved a UHaul of boxes to the house (casket boxes) and my son looked up and said - 'they closed our school'.  I jumped up and grabbed my purse and bee-lined it to the local store.

Several years ago, the FIRST robotics topic of the year was natural disasters and so the kids had studied all kinds of preparedness and worked for a year on innovative projects regarding getting populations to do the right types of things in the face of some sort of disaster.  In this one, I am glad the kids had advance mental preparation when younger.

We had spent a few weeks casually talking to our college son to get him mentally prepared to respond if we asked him to come home.  That helped, it was so hard for my 20-yr old son fresh off spring break to get a call from Mom and be asked to throw stuff in a bag and that I would be there in a few hours to pick him up.  His university had just announced online courses but that they would be residential during the rest of the term. Of course as soon as Harvard and MIT across the river closed that day - I knew it was days until his university would have to close.  So he was horribly embarrassed to leave, but it was Thursday night and if we could avoid a whole weekend of coronavirus parties - we wanted that buffer.  We allowed him the next day to pack up his room and say good bye to a handful of friends as they were coming to terms that their own parents were starting to call, expecting the university would close (they did it the worst way-announce on Sunday night and be out by Tuesday).  I was so relieved that he respected his father's and my request to come home in a way that limited our exposure.  Of course he has now been notified he can't come back for summer semester so he is stuck here with us until September.

My kids have been awesome.  We all talked for weeks about what we would do if we had to become shut-ins.  So we had identified skills we wanted to develop, tools, materials and fun stuff we would need and they were all ordered that night.  Loads of projects.  At Christmas we had given my husband a rain check on a lathe to be ordered for this summer after we could reconfigure the shop.  It arrived a week ago.  So at this point it has been non-stop project time and the family has been so busy.  My oldest has so many projects envisioned we will need to be in quarantine for months.  In fact - its been a bit like The Martian around here - complete with moving robots.  The boys want to know when we get to try growing potatoes in our own poop.  I said the garden room would be appropriate.  (ha ha).  There was a baking soda experiment on Sol 2.  Getting the 480 pound lathe into the basement by ourselves on Sol 7 was hilarious as delivery men wouldn't come in house.

They have kept the humor up - which honestly is pretty amazing.  The day we 'went inside' or "Sol 1" was particularly hard on my youngest.  We were in the UHaul and his worst fear came true - the World Championship for Robotics was canceled.  I haven't had the chance to tell the rest of the story from last year or this year's story.  Sometimes I do that as other teams scour the web for pictures of our robot.  Spoiler alert - they had just won the state championship four days before and were #2 in the world (OMG, he is just a freshman) - he was legitimately competing in late April for the World championship as captain of his own team.  He was upset that wouldn't happen now.  I feel so bad for the kids.

So his daily humor is good.  In fact, even though it is now likely his robot will never get fielded again, he has taken on not only rebuilding it to be the best ever but doing prework for next year.  He is taking advantage of his brother being around to tutor him in advanced CAD and other techniques.  His team has been keeping busy in their own homes building a new team website, learning more coding skills, etc.  It shows remarkable resiliency for these kids.   Every day there is another big thing the kids tackle.  They cleaned the whole robot room this morning just to play a rousing game of ping pong on the work table.  My husband and I took a walk on Sol 10 to talk serious stuff and the boys figured out how to hook their music to the home speakers and had the place rocking when we returned along with a huge dinner cooked.  The board games have lasted hours and we are only on movie #5 of watching the entire Marvel Universe in chronological order.  Actually, the TV has barely been on.

Sol 14.  I actually couldn't believe it - after shutting down the shop I was starting to think about what I would do now that I was shut in and I didn't really realize that we had been locked down already for  half a month as a family.

So they have been advising me on how to do modern informal videos or vlogs.  So expect some stuff in the future.  I promised them I would take a "Vacation" first.  It lasted 30 minutes last night.  But I will try again sometime today and make it longer.

I will need to close down the Thistle Threads Shop site so that I can respect the needs in my community to shelter in place.  As much as us needleworkers feel that getting our threads is 'essential' - I need to place the health of my family and my community above our needs to stitch.  I must stop the constant trips to the post office. I anticipate this being about 3-4 weeks, I hope.

Unfortunately production in France of silks and other threads as well as linens in Italy has been shut down.  We hope and pray for our friends that this is short but it will inevitably result in long delays of materials just when we have lots of time to stitch.
Shop site will become inactive at midnight EST Sunday, March 22nd
I will not be going out of business but will need to remove products/inventory from the site to prevent ordering.  I have modified the inventory to reflect only things in stock today. When I am able to reopen and ship safely, I will put the site back up.

I will be continuing to write my lessons, post to the blog, and maybe even will have time to do some development and uploading of videos/needlework nibbles that have been in the works but I just haven't had the time to finish.

For those in new classes starting April 1st, you should have just gotten early access to the classes as I am sensitive to your interest in starting early with theme on your hands.

Please everyone stay safe, respect the community rules on interactions with others and lets see each other happy and healthy later in 2020!!

Tricia
Posted by Thistle Threads at 8:25 PM No comments: