Last year I was teaching in Williamsburg, and I got a text message with one word "Scranton".  That was how I found out that my robot team had advanced to the East Super Regionals.  I hadn't thought that our rookie year in the metal robot division would come to anything so I had scheduled teaching during the state championship.  So this time I didn't and was able to text out myself from a venue my one word exclamination - WORLDS.

It has been the longest haul ever and I just arrived home drained but happy, so so happy.  My robot team had an AMAZING four weeks.  We have had more ups and downs emotionally and the level of work going on around here was mind-blowing.  Somehow I managed to pack 500 Frostings Kits last week in the chaos.

They managed to pull together and pour on the work before the State Championship and get through it with an invitation to the East Super-Regional which was held from Thursday-Sunday.  We just arrived home this morning.  72 teams from a quarter of the country.  24 would advance to join the other 72 from the nation and 32 from around the world at the Worlds.  That is 128 out of over 4000 teams.  We have been trying for this ever since they were nine years old, so seven years for many of them.  It is a very hard invitation to get, in First Lego League, there are 80 invitations for 120 regions, so 40 of them don't get to go - it is by lottery.  And you have to be the best team out of the 425 in this state.  We did that in 2012 and the lottery didn't go to our state that year.  So they earned it - but didn't go.  That whetted their appetite.

Last year, we had a debacle with a team purposely knocking us down and so we got skipped by a fluke.  To this day other top teams thought we went as it was so obvious we should have.  So it was this desperate desire that has driven these kids to work so hard and to work through the hardships and teenage difficulties and maturity issues.  It culminated two weeks ago with a meeting where they individually each gave me a heartfelt apology for a season of teen behavior and expression of gratefulness that I do this to the detriment of my businesses and family life. You could have knocked me over and I stood there and cried.

So we got in the cars on Thursday and headed to Scranton to try our luck.  Would it be on our side this time?  Would we perform but yet be skipped again (the advancement order still hasn't been fixed)?  We got there and the robot could no longer climb the mountain even with a system that everyone who viewed it was usually astonished for the effortless way it climbed.  There was an entire day of debugging - why wasn't it climbing?  Panic on the part of the parents watching, pride on my part as I watched them calmly work the problem like a bunch of engineers trying to get Apollo 13 back.  By 11 pm we had it figured out and the robot worked flawlessly again.

So the two days of matches were nail-biting as our partners weren't strong but at the end of the qualifications, we were the #2 seed (only losing to the #1).  We went into the quarter finals and proceeded to the finals until we were knocked out by a technicality that was later admitted to not be valid by the refs but our partner (#1 seed) had pissed off the refs so much over the entire competiton (we agreed, our partners were jerks) that they didn't give in.  Lesson our team learned as we stood back appalled as the partner went at the refs - don't piss off the adults in control all weekend if you might need their benefit of the doubt later.  :-)

In the end, we won THREE trophies.  Considering that there are only 7 judged awards and then a
handful of robot performance ones, that was amazing.  Effectively we took four spots to the Worlds.  We also set the new World Record for game score and one for autonomous scoring.  And on the unofficial stats site that the coaches keep, we are now the #1 team in the USA.  And their nice demeanor all the time made them a crowd favorite - we even got hugs from the hotel staff when we walked in with the trophy haul who said they were some of the best behaved teams that stay there.

The kids are over the moon.  When we realized before the finals that we had clinched a spot, the kids stood in the pit and cried tears of joy with me amongst hugs.  Extreme relief.  They aren't even upset by the controversy as they got what their goal was - an invitation.  All else from there was gravy.

It has been the roughest year ever for our team.  The new league format was brutal and in the end, three of the 8 teams in our league who have been competing against each other from Oct-Feb have been advanced to Worlds.  That is just unheard of, apparently we just all kept raising the bar on each other, no wonder we are flat out exhausted.

But I was thrilled as they were a TEAM.  Everyone was present and focused and doing whatever and anything that was needed.  They were on-point and the robot worked flawlessly, shocking as a rule it usually never works as well as in your home environment.  At one point the robot was in autonomous mode and it did the three things that were a stretch for the top robots and then it turned and went over to the mountain and collected three cubes and drove up the mountain triggering several other point gathering items, many teams struggle to drive it up the mountain without it flipping over and rolling off much less letting it do it autonomously.  No one had seen a robot do that this year and the refs even came over and high-fived our drivers in a shocking show of respect.  Not a surprise that we won the programming award.

So now I have to figure out how to get there, get the robot and a car full of stuff there and rooms.  Crazy as the Worlds takes up 61 hotels and the big dome stadium as well as several other venues.  It looks to be crazy, crazy, crazy.

And only a week from going, they took a whole night out to run a robot event for an inner city group of kids that we are going to help form a FLL team.  It was amazing to help them build robots, try out ours, show them how to program, etc.  We took the little team who are the same age and they all got along and we ended up with a package of thank you notes.  Left them with all the things they need for their new team including three full robot sets.  It was very gratifying.  We will be back many times as the big kids now totally understand the value of having an impossible goal, the support and guidance to gun for it, and what it means to your life.  They want that for these kids.

And I have cried so many tears of joy for them.  Now to get the Frostings Club shipments started!  Sleep will come later. 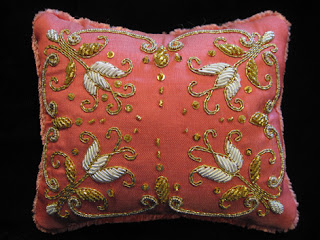 There is a new project for the threads in the first Frostings box that has been posted under the Web Instructions -> Projects part of the website.  This is a project that I worked on live at the MET on stage and I was hoping to link to the video of that as well but they are rebuilding the MET website and it won't go up until after that.

This pink pincushion uses the different bullions and checks as well as a rococo and striped gimp in the class.  Add your own couching threads, spangles and ground fabric and you have a really beautiful project.  The pieces only uses about 20% of each thread type or less so you have plenty left to make more or use for your casket and other projects.  This piece joins the Blackwork Rose and Pansy as pieces that can be made from the threads in the box.

And of course there is another box coming out soon!  The last thread is in production and due to be finished in a little over a week and to me to get into the boxes laying here.  So they will be shipping out for people in the near future.  YUM!

I have shown the piece without an edging and tassels - there are soooo many options and some of the options are in the next Frostings Box so I didn't want to tip my hand.  I would also like to see what ideas others come up with.  Often acorn shaped tassels were used with metal threads covering them at the corners with thick gold or silver braids around the edges.  I will pull out ideas from my archive and put them up on the blog this week.

If you aren't part of the Frostings Club and want to be - click here.

Posted by Thistle Threads at 9:08 AM 2 comments: