I am back from my five day vacation.  That was way too short!  We went to the Alps to meet the other robot family who has temporarily moved to Berlin for work.  He was my assistant coach and the children were key on the team.  We got our 'robot' talk out of the way in the first hour and then got busy on enjoying a ski vacation together.  The best part about going to the Alps was the limited internet access!  Unplugging is very good for the soul.   Skiing in the Alps has been a lifelong dream of my husband's - the only reason we learned to ski.  Last year we had to cancel our trip with this family because of my father-in-law's stroke; so I was glad we could make an abbreviated one this year to make up for it.

Just before I left, I had almost finished this video for everyone.  I recorded my lecture at Sotheby's in January and made it into a YouTube video to share for those who weren't there.  My lecture/demonstration at the MET in December will be coming online in about a month as part of a reorganization of the MET website - and I will post that as well then.

So enjoy the lecture - it is about 18 minutes long and as there is audio, you won't want to listen to it at work!

Posted by Thistle Threads at 8:14 AM 4 comments:

Hmmm, every time the blog goes dark you gotta know that I am busy beyond belief or upset about something!  I have been packing and shipping kits (Stumpwork is ready and Cabinet of Curiosities went out) and designing the new sampler for Winterthur and every moment I haven't been doing that - I have been 'roboting'.

The kids had their League Championship on Jan 30th and it was a complete haul to get there.  Since the competition is getting larger (more teams) - they have gone from a qualifier followed by the State Championship to a 3-meet plus League Championship and then States.  That is just killer for the kids and us.  It means that we have to have a working robot in six weeks instead of four months and then rebuild the thing every four weeks to add or significantly improve functionality.  That is just madness - every rebuild is about 80 hours or more of work. Then add team dynamics to it - such as "It's David's Job, not mine" and you get a few things that had to be corrected - hence my general silence.

Teen sloth and others being more comfortable in their role than pitching in on the mechanical side ended up with my son and the other mechanical guy pulling 30-45 hour weeks.  It had been really getting to me and I had been using the parents to goad the kids to try to improve the behavior of the 16-yr olds.  Well, it came to a head and I totally freaked out when I found that my son was setting his alarm at 4 am to get up before school and do 2 hours of work everyday the week before competition as the time he was spending after homework and on the weekend (40 hrs) just wasn't going to get them ready.  So his 40 hr weeks were turning into 50-60 hrs.  Now I know that some parents are dealing with things like their teens sneaking out or not being where they are supposed to be - but I just can't deal with him missing out on his teen years doing a full time engineering job.  It came to a head with five of them not showing up on time to team practice the night before the Championship as they didn't want to leave a pep-rally early.  The missing kids were collected by a pretty pissed parent for me - everyone expected that they were already at my house.  Bad teen decision...  Luckily they still made it through the Championship to live another day, but I was a pretty upset person with what hadn't gotten done and how much was left on just a few shoulders.

So I had to do a major 'readjustment' of attitudes with 12 teens as well as working with the parents on it too.  After I talked to the parents, I thought the robot team would be done in two weeks for good as they all realized that my son had already learned everything he needed in life and that it was now something that was harming him.  But we all agreed that I owed it to them all to talk to them without him and explain why I was leaning towards dissolving the team in a few weeks.  Give them a chance.   If they all work as hard as he has been, they would really do well and he would not work as hard.  Well, surprisingly, the kids who had been on the team the longest sat there with tears in their eyes as I revealed that their friend hadn't yet ever done some things they have done - like gone to a dance, learn to drive, go to a high school event, or other things like that.  Never had the chance to get into trouble or make bad decisions like them.  I wasn't sure how it was going to go - but they surprised me with their conversation on the matter.  I agreed to suspend the decision until the end of the season and see if their epiphany lasts.

Well - I am not sure what is worse as now I have 12 HIGHLY motivated kids on my hands.  It has been all 'what can I do to help' and surprise walk-ins.  Apparently this is far more important to them than their actions this year had been expressing to me.  Soooo... I have now had double the number of kids in the house every day.  Then add two big winter storms that canceled school the next Friday and Monday - they came during the storms - and they all lived here for four days straight plus some during the week.  They started showing up by 2pm on Friday and still haven't left this weekend (yes, it is monday).  Winter Break started and no one has homework - so while we are leaving for a really needed vacation tomorrow night - they expect to be here until mid-day before our flight.  We certainly have gotten an amazing amount done in advance of the States on Feb 27th.  But the amount of soda that has gone through here could make a can tower to the moon.  They are working right now - I am going out for the pizza in minutes.

I will be looking forward to the end of Robot Season - whenever it comes.  But I guess secretly I am glad that they all decided so far to prioritize this above some of the other distractions that have gotten in the way.  Guess I should be glad that my parental lectures are about things like supporting each other more and pitching in and not about staying away from drinking and drugs.  Sometimes I can sit here and cut and pack metal threads while working with them and answering questions.  And some have even taken over enough for my son that he has taken some needed time off.  Lots and lots of lessons all around over the last two weeks.

Boy do I need a vacation!

Thistle Threads will be closed from tonight until the 22nd.  And there will be no roboting either.  Shipping will return on the 22nd, including the Stumpwork course.

Richard pointed out Karl Langerfield's newest Channel collection to me today - and we quipped that we would need to add a new line of wood shavings from caskets to my shop!

Take a look at how amazing wood shavings can be as an embroidery material.  Watch the movie on the site - it is georgeous. 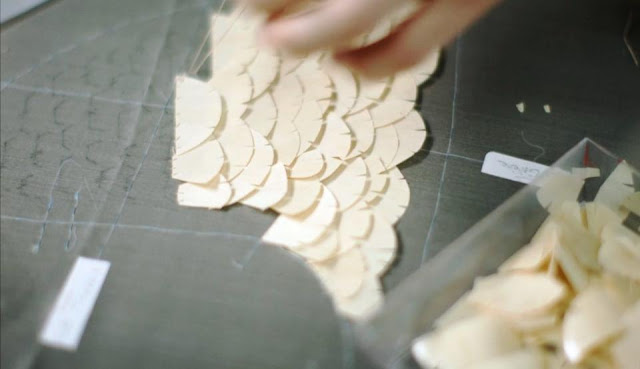 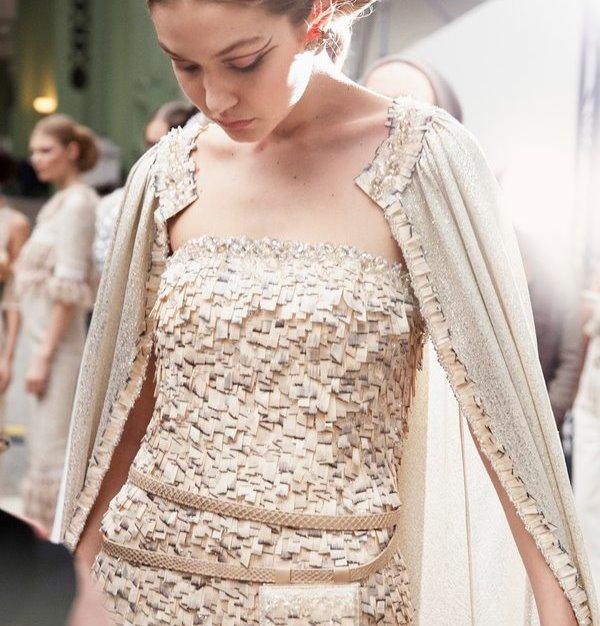 Posted by Thistle Threads at 8:06 AM 6 comments: