Back from Vacation - Thistle Threads Opened

I am writing this at 4 am - hate jet lag on the way back!  We landed yesterday during the solar eclipse in Boston (ominous?) and I am back to getting the house up and running as well as the business back to work as well.  So if you have been holding off on orders, know that they will be shipped this week if made.

Tricia
Posted by Thistle Threads at 4:29 AM No comments:

Today was a Good Day

I know I am on vacation, but I had to tell you that today was a good day.  We have been sad due to some personal news on the Brainstormer front from home for the last few days.  But today was a good day.  A full day in Venice and much of it for myself.  I bolted around the town with a hard-fought list of artisans I wanted to visit.  It is rare to find a store, find it open during the European vacation (and a Catholic holiday to boot) and then in the store to find the actual craftspeople!!  YEA!

One was a famous paper marbler and the other was one of the family owners of the last handweavers of Venitian velvets - Luigi Bevilacqua.  The person I met was their - 'me'.  The technical guy who investigates the old velvets under the microscope, figures out the patterns, sets up the looms, and all things technical.  To say we had a great discussion is a understatement!  Watch this space for more yummy discussions and pictures of how things are made.  I loved it as learned soooo much!

So the Casket Stitch Along is going very well!  There are about sixty people using the graphs to work a casket and I have gotten to the point where I have seven out of the 18 panels done for my casket and am working on number eight right now.  This is the newest piece for the casket below.

I was just searching for the pictures of all the other sides and couldn't find them on my hard disk!  So I will have to wait until this next piece is done and post all the panels that have been done for fun!

This latest panel is for two months - September and October, but as the teacher...I have to be done with it Sept 1st so I can have the graph done and up for those waiting for it.  So as I am working on two caskets at the same time - about a panel a month - I had to take it with me on vacation.

Quite a deal to figure out how to do that!  The entire right side of the casket (friezes included) are mounted on one large slate frame.  As we were getting closer to the date to leave, it was becoming obvious that I wouldn't be able to stuff four months of stitching into one and get the Frostings shipment shipped at the same time?  REALLY??  (no I don't have a legion of little mice that come out at night and stitch for me!)  Ok, my husband started insisting that I go to bed by midnight and started saying obviously dumb things like ''why can't you take that with you?'

Easily said than done.  A 26" x 18" slate frame doesn't easily travel on flights.  And this trip - well I will be in eight countries and no less than nine flights.  You can imagine the horror of being told in some small Greek airport that my frame would have to be put in the hold at the gate.  I would freak out.

So I finally bit the bullet the night before our leaving and decided to do 'it'.  IT was to cut the piece out of the slate frame and reframe it onto a smaller slate frame, but that meant it would be kinda tight as there is only about 3/4 of an inch between the pieces and two of them were all done and fully stitched (and nicely in square).  So I decided to paste the paper for the finishing process onto the two finished pieces before I removed the tension from the frame.  So off to mix up a bit of the wheat paste, find some of the paper and carefully spread the glue on the back of the paper.  After a minute when the glue was more tacky than wet, I placed the embroidery face down onto a stack of books that had a light towel on them and placed the glue wetted paper over the finished embroidery parts.  Then I pressed them hard into the embroidery with my fingers.  Then again with a light towel on top and a few books for overnight drying.

I was then able to cut off the finished works without them raveling and right at the line I would cut them to paste onto the casket.  That gave me about one half inch of linen to fold over and use to attach the panel to a smaller slate frame.  I happened to have a variety of frames that were made decades ago and lucky... one just the right size for this issue.  Kinda travel sized.

So I have been working this piece daily when I get a chance and have made quite a bit of progress.  It is pretty clear to me that I would never have been able to get it done along with the stump work panel that is waiting for me at home in a 10-day period (plus instructions).  So good thing I was able to figure out a way to 'bring it with me'.

Posted by Thistle Threads at 2:33 AM No comments:

If you go to the Landesmuseum Zurich, they have a part of their exhibit on textiles that is incredibly innovative and makes you stop and understand the piece.  I have to admit that I am not that much of a tapestry fan; it is a narrow set of techniques and not my favorite look.  But this exhibit made even my husband sit and listen to the entire description of the piece which was over five minutes long!

It starts with a bench with recessed sets of headphones with narration available in multiple languages.   You sit and watch the four projectors play an animation of light on top of the tapestry.  Having the areas highlighted and moving is really fantastic and can significantly enhance the discussion on the headphones.  I loved it!  More museums should consider this type of effect for large objects with complicated storyline or symbols.  Of course I had many questions - like light levels and protection of the dyes.  But I am sure they had done the trade-offs and it would be interesting to understand.  I haven't ever seen so many people engaged in a tapestry - so it was working! 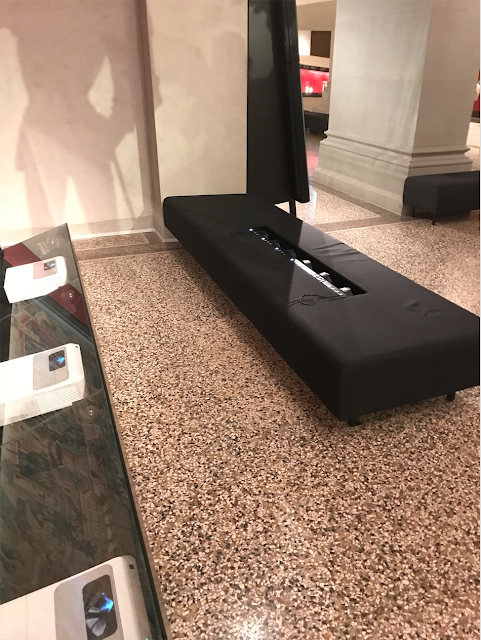 Posted by Thistle Threads at 8:00 AM No comments: