Last month while on vacation, I was working on my stitch-along panel and realized that I was making a series of natural choices that resulted in the piece looking a great deal like an unfinished panel I had seen before.


What hit me was that I had made many of the easy choices first.  It was obvious that the clouds would be the same cream colors I had used in the friezes.  And the sun in yellows.  The sky is blue and then an iris is either purple or blue - blue being harder as there is so much sky.  So it was the easy choices that I chose to do and stitch.  The bug, lady and snail have many more choices so I kept putting it off, letting the easy choices help me visually realize what colors were missing or out of balance. 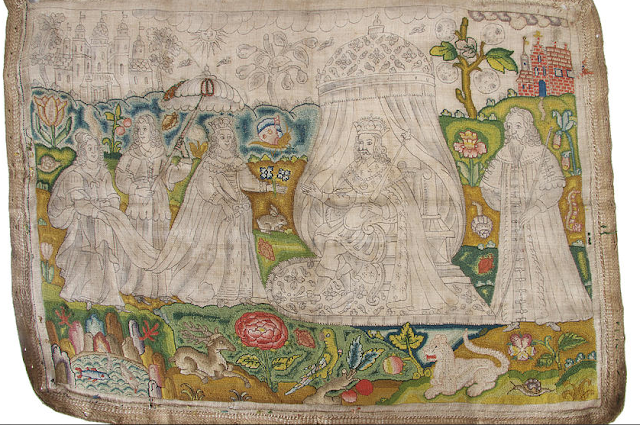 Then I return to looking at this piece of embroidery and think about how the person approached the piece, it was much easier to think about the ground, animals and flowers which had far fewer choices for each and would allow progress to go forward before the more open ended figures and canopy was attacked.  This is almost counterintuitive as in many embroideries, you start with the main elements and work out to the supporting elements.  But when faced with making the color decisions yourself with a piece piece that only has black and while outlines on it -- it is far easier to work in this reverse.

And once you have this much completed it becomes much easier to push yourself to commit to a choice and get working on the harder elements - because it is almost already half done!
Posted by Thistle Threads at 1:56 PM