Last week I rushed to Salem, Massachusetts and attended a quick tour of the Empresses of China's Forbidden City exhibition that is on until February 10, 2019.

The Peabody Essex is a gem of a museum in a small city.  It is almost of the stature of the Museum of Fine Arts because of its mind boggling collections that came about because of the import/export trade in Salem which was a major maritime power.  It is especially rich in its asian holdings and as such has had a close relationship with museums in China.  This exhibition is rare for two reasons (1) no one does exhibitions on the empresses of China - they are shrouded in secrecy and (2) the Forbidden City doesn't exhibit textiles as it is too polluted and humid there.  So there was a massive amount of original research on specific empresses and they pulled in 38 empresses' robes for the huge exhibition that look like the day they were worn (some as old as the 17th century).

The reasons I raced there last week when I had too much to
do was the secret info that the textiles are so fragile and such exquisite condition that China had decided that the textiles would rotate during the show.  That means that in mid November, they are flying another 38 robes from the Forbidden City to Salem to hang and taking these back.  I have never been to an amazing exhibit which will change mid way and you need to see it again!   It will also be traveling to Washington DC afterwards and yet another set of 38 robes will be brought from the Forbidden City to hang in this version of the show.

I will be seeing them all I think as they were so beautiful and there was so much contextual information!  If you are in the area, get out and see it again and then put it on your calendar for after Christmas to see the second set. 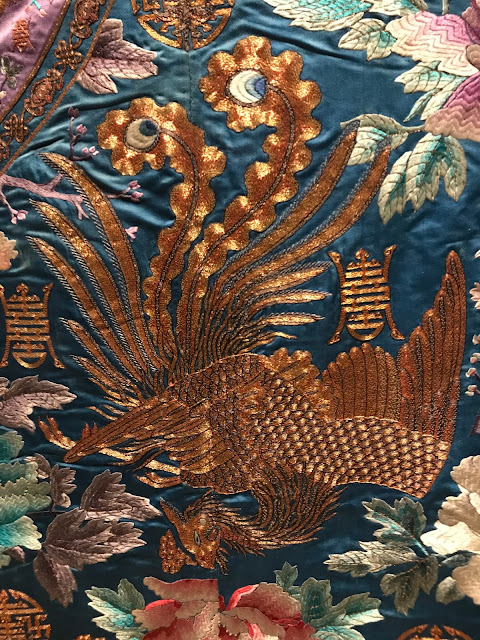 Posted by Thistle Threads at 8:14 AM