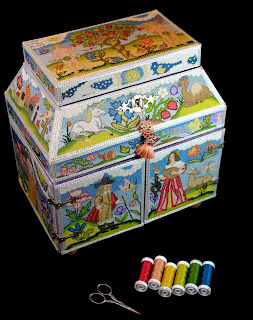 I finally was able to allow registrations for the Five Senses Casket with the tent stitch embroidery on it because Access Commodities and I have found another old-world weaver who was willing to spend the time to reproduce the linen.

We originally used this amazing old looking linen called Montrose which had been made in one batch some 20 years ago.  In the intervening time no one seemed to want it until I came along and recognized that it was a good substitute for 17th century linen!  But by that time the original weaver was organizing his retirement and closing his looms down.  So Access Commodities bought everything that was on the shelf and we worked through it.

Just when I got the casket done and everyone said - HEY - I want to do that!!  We were out of linen. 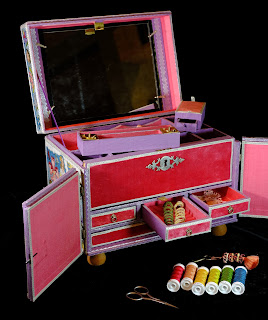 This happened to several other good things and so another really deep search for those precious gems of old world makers was attempted.  You talk to everyone and try to find out sources on the ground.  Well one gentleman was willing to try - and it wasn't easy as the climate change has really affected how linen grows and what species can be grown where and that impacts the length of the fibers and thus the quality of linen.

We decided to commission a 10 yard sample and were thrilled with the results.  So the big boat of
linen is headed to the USA and I will have a supply of Montrose again!!  That means that a few lucky people can decide to do a double casket with a tent stitch design over 20 count.  And I know for a few people that is heaven!  Eyesight sometimes gets the best of us.

So if you are interested - come on to the shop and look at the parameters for the course!

Tricia
Posted by Thistle Threads at 9:43 AM