The Frostings Club is Open! 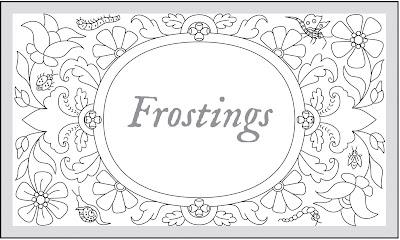 After a wait of forever, the first two installments of the Frostings Club is available to be ordered.  I have decided to group the first 60 threads into two packages to be the most efficient on shipping costs, especially for those overseas.  The shipments will be made in early December 2015 and March 2016.

The club can be paid for in full or monthly over a period of 6 months.  There will be 475 spots in the club.  While I can't ruin the surprise of the curated threads, what I can say is that they are all appropriate for 17th century embroidery types and especially for stumpwork.  There are new colors of your favorite threads, new constructions, gold and silver threads you may never have seen before, silk trims that will delight, and new lines of silk never available in these colors.  For some of the threads, they will be in extremely limited number and for some, this club was the kick in the pants to get them made and they may stay in our lexicon for longer.

It was an enormous challenge to get to this point.  We certainly did not anticipate the Au Ver a Soie fire in the middle of manufacturing - which contributed highly to the time to be ready to announce.  We have expanded the number of companies in the 'ancient textile business' that are making threads for this work, but that brought up some interesting and unexpected challenges.  An interesting and yet scary trend was companies who were initially excited to work with us to create these reproductions and then had to say no after we did our trial runs.

I want to explore that topic for a minute... Industries can shrink to the point where they no longer can handle large business that comes in the door.  That is the case here!  If you bring an order that greatly effects their business and haven't been a long term customer, management must decide if they will go out on a limb and hire and train a new workforce (if they even can!) or if they just can't take the business because it jeopardizes their existing, longstanding one.  To get some of the fantastic threads I want and we have viewed under the microscope, other industries which make trims were approached.  They already make some of the constructions and incorporate them into their trims.  Initially many were very excited that we only wanted components, but quickly they realized that the numbers we were describing were huge and beyond what they ever make on a daily basis.  They normally focus on short runs so they can maximize their color variations.  They trade-off efficiency of production technology with variation so they can have a large product line.  Or in other words, they can easily make a few yards of anything - but can they make miles of one?

After long discussions and careful color dying to match our existing lines, we embarked on trials to see what technical limitations and yields they had for some of these exotic threads.  What was a huge surprise to many was how hard it was to scale up to the volumes we needed for the club.  Some threads made it through the wickets and we all agreed that they could go forward and you will find them there.  Some were so labor intensive to do in volume that the companies decided not to go forward lest they commit their labor force to this project entirely.

That is a stunning realization.  We are still working forward to see if there are other companies still left with the capacities and equipment and
interest.  Maybe in our next sessions of the Frostings Club we will have solved this conundrum for some of the dreamy things I want you to have!  In the meanwhile, we had to capitalize the trials to see if we could scale up and those threads are being offered now as Limited Edition threads - and are very limited in package numbers (around 100 or so).

So if they are interesting to you - grab what you would like to use.  I certainly hope that we can solve our technical/scale/business issues with some of these complex threads and later bring them to market in a wider variety.

And I hope you will join the Frostings Club and validate the idea and help to recapitalize the funds to make more new threads!  There are at least enough in manufacturing, in process, or on the drawing board to fill up another Session!

Posted by Thistle Threads at 3:04 PM