What is the Frostings Club?

For those who have more recently found this spot, you might have missed the discussion about 18+ months ago about a thread club, which I am now calling the Frostings Club.

This is the natural extension of years and years of thread development that started with The Plimoth Jacket.  Back when I got involved in the project, I was well aware that the threads I had been studying under high magnification on 17th century pieces were not in my local needlework store.  But it is these unique threads that either enabled the look or mechanics of the stitches that we love so much.  So I used the project to get two specific threads made: Gilt Sylke Twist and #4 Passing on Silk.  It took the coordination of two companies, a distributer and myself with the addition of the market (you all - through classes) to get the threads off the ground.  It was a resounding success and all the begging and wrangling were worth it. 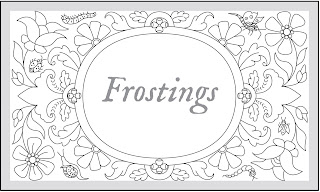 Any time a thread is made, a certain minimum amount needs to be made.  That minimum is dependent on the construction of the thread, if machines are available, if dying needs to be originated or if the raw dyed materials are available as well as the yield on the process itself.  That batch has to be paid for outright by the teacher and/or distributor who ordered it.  So to get a new thread, there has to be a way to consume more than half of it to recoup the money invested, otherwise it will never happen.

So after the success of the jacket, I started trying for silk purls.  There had been activities with gold thread makers for years on and off and the samples always ended up being rayon.  So I had some heart-to-heart talks and realized what the biggest problems were to getting silk.  They were (1) the makers didn't think anyone would buy silk as it would be expensive so they weren't going to add that to their product line and (2) they didn't have a way to buy silk of the right weight and twist.  So I had to provide a market AND solve the technical problems of the silk supply.  Providing a market is usually going out on a limb and ordering enough of something that the manufacturer will make it the way you want instead of asking them to come up with a new product and you will take only a few tubes.  Then coming up with classes and hoping others will like to take them.  But again... it was a success and now silk purls are on the market (with a seeming never ending thirst for them!).

So with these under my belt, I decided to tackle the casket and had wrestled for years on the best way to do it.  After much work with smaller classes to get other threads prototyped in a small number of colors (thick silk gimp), the way was smoothed and I was ready to jump.  The only way would be to design a set of classes that would have big kits full of materials that everyone would get.  If everything went well, there would be enough students to receive the 1/2 of the batches and it would allow us to bring back a ton of threads/materials and to design them in the colors that matched the back of original embroideries.

You know the answer to that question - it worked and we have a plethora of new threads and materials and in a large color range!  Four kits in two classes.  But then I could see on the horizon that the classes were ending and I didn't know what kind of vehicle I would use to get more threads made, as we hadn't exhausted the things we saw that we wanted.  We would be returning to the time when we might see a new thing in only 1-2 colors every other year when I was able to find a venue to design and teach a new class; and that was tremendously disappointing.

So the Frostings Club was devised.  A way to have enough people together to purchase the first run of the threads so the flow of new threads doesn't stop - because many of us have this big casket project and we don't need a new class - we need more materials!  I did a big survey of my students and factored in their responses to what they would like to see as well as correlated my yearnings and the comments by dozens of students over the years.

In my travels to the actual plants, I often saw things that 'exist' meaning a sample has been made special for a museum but it isn't made and distributed to needlework stores.  Some of those items would be amazing in the box.  Sometimes we dug through boxes of prototypes or tools and found things that could be adapted to match 17th century items.  Sometimes the items selected were colors that when I stepped back are missing from our historic collection and to origin the dying, we need to include it.   Sometimes we were opening up a new European manufacturer and bringing in existing threads to a new audience.  In all cases, the amounts that go in the box are useful and can be directly applied to the genre of 17th century embroidery and stumpwork.  I define useful as what you would need to execute the most likely project you would do -- so not samples -- but tubes and lengths that would normally be sold in retail.  There will be some small projects and examples that are timed with the boxes as well as a contest on creative uses with some of the materials.

So this has been a big gamble... something not tied to a class.  I am hoping that it works so we can launch upon the next sets!!

Posted by Thistle Threads at 6:00 PM