This was a big treat as the Burrell Collection will be closing in 2016 for four years.  The building, while hailed for its design, is falling apart and leaks horribly.  A very bad thing for a museum.  We saw buckets all over the galleries.  So they are going to move the entire contents out, fix the museum and increase the gallery space and then move back in.  That will take a long time!  We were told that finally a vote was taken in Parliament and objects will be able to travel.  It is unlikely that many of the textiles will travel as they are much more fragile than paintings, but that was good news as it means they can do some more local loaning to get textiles seen.

So we were excited to make the long drive to Glasgow and made a bit of a tour of it, stopping at some sights before the museum opened at 11am.  The museum has two exhibit halls with 17th century embroideries on display so those waiting their turn to rotate through storage had plenty to enjoy!

Again the view in storage was impressive with six caskets and two accessories on display.  We enjoyed opening all of them and looking at the differences in how they were presented and constructed. 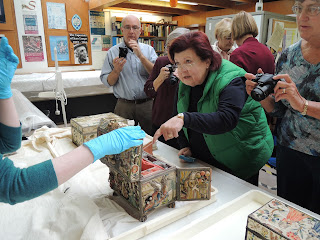 I won't bore you today with tons of pictures of people with cameras or crowded around lovely caskets as I am allowed to show you pictures of the pieces... So I might stay on the Burrell for more than one day of blog.  (Is anyone complaining?)

There was a casket that I really like which is short and drop front.  The embroidery is somewhat simple with it being executed in long vertical satin stitches in blocks of color.  While that seems almost child like as a method, it is really sophisticated as a whole so I am not sure this was the means of girls but possibly a casket for retail sale or with a strong arm of a teacher.  The thing that makes me not completely sure about it being a retail casket is the existence of a
unfinished casket somewhere out there.  (If you know - let me know!).  The picture of it was in a mid-century article with no identifying information to track it down.  If you go from side to side, the pattern is exactly the same and the embroidered parts match the finished casket exactly as well.  I really want to find this piece.  First of all - it needs to be displayed together with this casket some day!  I placed the image on my iPad next to the object for everyone to look at. 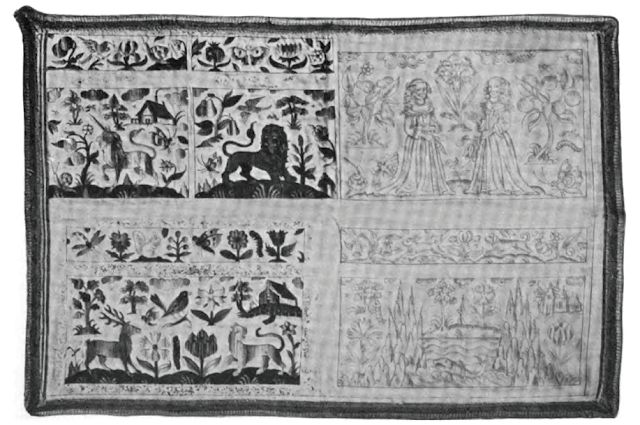 The interior of the casket was almost technicolor.  I really liked it.  All done in lovely laid work.  See what you think about the unfinished piece and the match up to the finished casket.

One of the silver linings about the closure is that they will be able to establish a digital database of their objects for the public and that is really something to look forward to!

Posted by Thistle Threads at 10:13 AM