The National Museum of Scotland moved its archives off site about five years ago in a massive re-do of the museum.  The archives are in a 'secret' location in Edinburgh and it was quite the logistics challenge to figure out how to get 40 people there and move in and out of storage.  We came up with a plan to take 20 there at a time and leave 10 in the guard building in a conference room.  To keep them amused (how could there be bored people when everyone has just met or seen old friends?) I brought an iPad with a selection of research photos to pass around.  Apparently that was a hit.

But it paled in comparison with the storage.  First you walk down an aisle of state of the art library
storage pods on tracks, this would become very familiar to the tour participants, and we rounded the corner to this view of a table with the objects I had selected on a previous trip.

We had a total treat and many of the participants stopped dead in their tracks and gasped - some had never seen an embroidered cabinet in the flesh before and here were five really outstanding ones on the table and two had contents that were laid out.  We had an extra whitework sampler, a special request by Judy.  It helped our host, Emily Taylor, to combine her request with our visit to reduce the number of appointments for the week.  And then everyone got to enjoy the bonus piece!

When I go on my pre-tour, I think a lot about choosing not just objects that are of the class we are studying but also objects that build to tell a story about the 17th century.  Sometimes I can't get out everything a museum owns so the point is to curate so we are never in a position of thinking 'oh another one of those...' by the end of the tour.  It always needs to surprise.  There were many, many surprises during the tour.  Sometimes I pulled an object that I knew people weren't aware of and it usually blew their mind.  Either quite spectacular in workmanship or surprising as a way to treat these objects in a new way.

This stop had several 'surprises'.  One casket is worked on paper with many areas degraded, showing the color lettering system underneath.  I like to call it the paint-by-numbers casket and there is a very similar one in a private collection with the same colors and numbering scheme!  The double casket with its rich, bright color has an entire box of really yummy pincushions, purses, lacet flowers and small toy animals out of purls.  These were so wonderful to see and indicative of the little girl's treasures they would hold inside.  I was thrilled to show everyone the tortoise shell edged casket with its wonderful stumpwork - but even more to remove the panel in front and see the super-deep purple paper with its silver stamps not corroded at all - gleaming silver.  And the pattern was so unique - a skeleton with crossed arms and scythes inter-dispersed between crowns.  Never seen that before and so striking.

One of the big things when you go to a storage facility for an appointment is to understand how special this is and to behave well so that curators welcome you and welcome you back.  There is an entire page of 'storage etiquette' that I provide the tour participants to make bringing this many people more effortless for the curators.  I get to stay in for all four sessions, and I see them noticeably relax during the second group when they internalize that we are really all going to behave well.  Then they really start to enjoy our enthusiasm and then things we discuss and discover.

We are dogged about taking off our jewelry, name tags, scarves, camera leashes, etc.  We all fill out any paperwork beforehand on the bus and
hand it as a single stack to avoid chaos.  Leaving our coats and purses in another room if we can.  And most important - not treating the curators as a servant.  This is hard to have us there and they require respect!  We can all get excited to see something inside and so when they open it - that is the chance and we rotate through - and don't ask a second time.  We make sure that there are enough objects out so no object has more than 1-2 people near it at a time for the safety of the object
- crowding in to see something is hazardous for bumping.  And after 55 minutes - it is time to go!  I have read that when concentrating intensely - that is the human brain's limit and after that your visual overload makes you really tired (we could vouch for that!).  You no longer have interest and people start standing around and talking.  That is the most dangerous time for touching or bumping an object so we limit the storage time to 55 minutes -- and every session goes that way and the last five minutes people are just so overwhelmed.  Any more time and we would make the
curators very nervous with the noise and milling about. 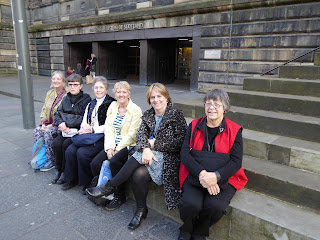 The bus did a steady business of going back and forth to take people away to go to the real museum as when we were done, we had a special lecture by Naomi Tarrant in the museum set up.  Naomi was the former textile curator and author of two wonderful books:  Textile Treasures (the double casket and its toys feature in this book) and the newly published Remember Now Thy Creator.  This new book catalogs and treats the subject of Scottish samplers.  So we asked Naomi to lecture to us about Scottish samplers and it was lovely.

We combed the museum for textile objects and then closed the museum and sat down outside, exhausted from our first real day of storage visits!

Posted by Thistle Threads at 9:04 AM