Sunday at the MET - Video of Lecture/Embroidery Demonstration

Back in January, I was invited to speak and demonstrate embroidery at a symposium that celebrated the amazing work done at the Antonio Ratti Center of Textile Center and the Department of Textile Conservation.  I chose to work the Needlework Nibbles for the Frostings Boxes for the crowd and discuss the technology of gold thread embroidery as I was doing it, complete with photos of objects in the MET collection. 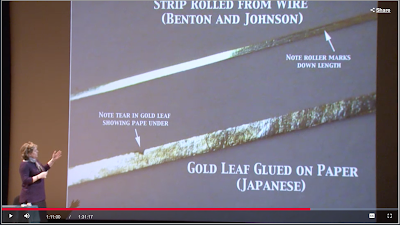 As I watched the video this morning (it was just posted) I had to laugh as it looks so effortless but that belies the two hours of work with the videographers that morning before the symposium choreographing every move I would make with my needle and adding verbal cues for them so they could move to the right places.  Something that is going on at my house right now with the robot crew who are making a series of how-to-build videos and they are learning how much work goes into a good and instructive video.  (I think they have more hilarious outtakes then finished clips so far!).

If you are interested in taking a bit to watch, my lecture/demonstration starts at the 1 hour 3 minute point with the end of Amelia Peck's talk and Melinda giving an intro.