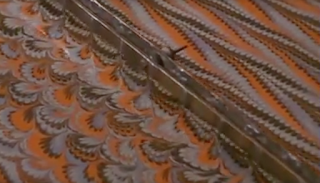 Caskets have marbled paper inside and a friend sent me a link to a video where the techniques were shown of many of the patterns that are inside the caskets.  This is an old video and while you can watch it with sound - I was with the robot guys and so I didn't.  You know the strength of a video when watching it silent is mesmerizing.

Since we all love making and have been fascinated with the process of making the caskets, threads, etc - it is worth a view.

P.S.  Thanks for the nice comments on the Brainstormers robot season to this point.  I have heard about a few misty eyes as well.  For both teams, the competition is hard, very hard and thing happen that are out of your control or that are mistakes that you didn't control.  It makes any win soooo sweet and I know that because of the way they deal with the trophy shelves.  They all constantly rearrange them, count, read the labels and hope to get another to fill it.  It is the first thing that happens when our clown truck (called affectionately the 'swaggon') pulls up - they grab any hardware and run downstairs and cluster around and find a spot.  For anyone who thinks that participation awards are the way to go... nope.  Blood, sweat and tears and tons of hard work - and missing it by 'just that much' time after time; it drives them.  That is how character is built and you can tell because the award screams from any team earning one are so loud in the stands, you would think they just won a million dollars. The team that won inspire in MA this year was sitting next to us - the explosion was enormous with instantaneous crying and hugging and they were falling down.  We didn't come home with a 'big one' and so yesterday they started again.  Just two days off to sleep (record was 14 hours) and catch up homework.  And if they weren't here - they were skypeing in.  If it was easy or expected, they wouldn't have shown up until our regular Saturday meeting.

I know how important it is to them now.  The senior prom is the last day of Worlds and so far - only one is flying back for it... and ONLY because he is the chair of the event and feels it is his responsibility (yes) to do so.   And these boys are actually popular (and could get a date) so they really are giving up something, the class president is staying with us on the robot field.  Unbelievable!

One person asked me if the kids value the effort we adults have put into this.  I am happy to report that they made a video.  At most levels, the teams can submit a video about their coach to nominate them for the coach award.  I always think they are numb and not realizing this.  Well - they kept it secret!  After the award ceremony where they show the top three videos and award the coach the Compass Award; they clustered around me like excited kindergartners lamenting that they had made me one this year and had been talking about it all year and they were sure it would get shown.   They shoved a phone at me to show me the video and then replayed it in the car along with all the outtakes and recordings (which were hilarious).  As an adult - I got why it didn't win.  As a coach I was crying and so touched, it was much more an ode to a mother on mother's day, burnt toast and broken eggs on a platter and all in the form of a rap song badly off key (ok - they are engineers not singers!).  I got all the references but judges would think it was so 'off'; less serious mentor and more mom of a litter of excited puppies.  I won't be showing it - it is just for me and will go in the box with all the drawings of me as a fat mouse, the tons of coupons for free hugs, and other love tokens from my children.  :-)  Much better than a plaque.


Posted by Thistle Threads at 8:42 AM