Have Embroidery, Will Travel

Sometimes when you are under a deadline, you have to do what you have to do.  In August I was under a huge deadline with a full side of a double casket plus the side of a short flat casket to get done except I was to be out of the country for over three weeks.  So the tent stitch one went with me.

A bit bulky was this smaller slate frame and you can imagine peoples faces when I pulled it out everywhere from Greece beaches to the airplane home.  But anywhere I could get a few stitches in was less late nights when I got home. 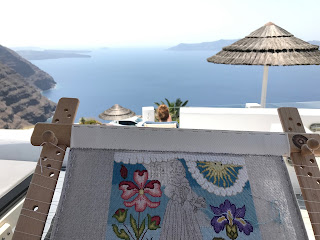 months) for other bottleneck points like this and see where I can work ahead a bit so I don't have to drag a big bag across planes, trains and automobiles to get stuff done!

Does make for some interesting photos.  They are kinda like a needleworkers version of those photos of the woman holding her husband's hand looking forward in exotic places in the world.  They are a Russian couple who started doing it and then it became a 'thing' which has been parodied on commercials.  He is a photographer and she looks like a model. 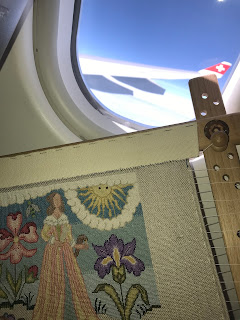 Well these are my photos of the world seen over the top of a slate frame.  And it looks more elegant than it was.  While I love travel, my husband is a junky and wants to eek out every last experience out of every minute we have - and that means doing quite a bit low budget things and we have never, ever taken a tour where someone else plans it for you (what nirvana).  So there were nine low cost flights involved - cattle cars with no magazine racks.  One plane I got on - I swear it was from the 1960s, renovated.  No - I know it was from the 1960s.  Sitting in airports on the floor with no air conditioning waiting for the doors to open and people to rush the plane to try to get seats - and I was hauling this huge (I can't believe they didn't make me check it) bag with a slate frame in it.  Now that I am approaching the end of my third decade doing this with him, I have my standards.  I will no longer wash my underwear in a sink.  Drying damp socks on my feet - jettisoned that in my 20s.  And I draw my line around coin-operated showers.  This time, we had to drop off a rental car at the airport and take a train out of the train station.  The night before, as we were reviewing again how to get from the airport to the train station, we saw a notice that the airport had been abandoned and lost its license.  WHAT?  Yes, the rental car place confirmed that and that their office wasn't open but we were to abandon the car there. Now how to get out of there at 8 am on a Sunday???  So he dropped us and luggage at the train.  He went there early with a plan to walk to a bus stop and if it didn't show up at the right time (we had someone translate from the Italian for us), he had 45 minutes to walk a few miles to the train station.  No taxis at an abandoned airport.  It got a bit more complicated as that morning we needed more cash to fill the car - in mountains and no gas stations open so you had to feed cash into the pump - no credit cards accepted at these old pumps.  So to make it more fun for us - our bank (and we and the manager still can't get an answer on why) shut down all our bank accounts.  Every card rejected.  Calls to the USA - 3 am their time on a Sunday.  Call back on Monday please.  But I need money!!  So all the cash went into the gas tank.  And then I was to try to figure out the cash problem while he maybe walked to the train station.  Too small of a town - no exchange office for my emergency dollars stash.  Then the unthinkable happened.  Me and the kids needed to pee.  Of course there was an attendant at the train station bathroom.  3 euros please.  I don't have 3 euros in cash.  Phone calls to VISA - wasn't there a pin set up a decade ago???  Finally cash.  Now the guy doesn't have change for a 20 euro note.  Trudge back up stairs and stand in line at cappuccino stand behind chatty Italians with a kid crossing his legs.   10 minutes to buy a bottle of water and get coins.  Phew - that was a complicated trip to the bathroom! And that is the story behind that picture of the embroidery on the train -- kinda needed those relaxing stitches at that point.

Last year I started this casket on vacation overseas too and I have a some pictures of myself working it in some exotic locations and some equally crazy stories.  It might be the best traveled casket before it is even finished.  I might need to put some of these pictures in a little book in a drawer to tell the story of the piece and I might just write down some of the travel mis-adventures that it saw along the way.  I might have to get a little ribbon custom woven like the one in Janet's casket - "This Casket Has Been Everywhere".

As I have dragged a piece of embroidery or appliqué quilt work around with me since we started traveling, there are quite a few stories to go with the embroideries and quilts in my house.  There are two samplers I did on my first backpacking adventure and my honeymoon.  I designed as I went.  In one situation in the Czechoslovakia region, my husband's job was to divert the attention of the B&B owner's son who resembled Frankenstein while I furiously charted the motif off a pair of cross-stitched curtains on my one ragged piece of graph paper I was carrying for this purpose.  Every time I look at the sampler I laugh at that adventure.  Just like the line that represents the restaurant I insisted on eating in that we passed in the Austrian alps.  Through the window I could see the faded cross stitched table cloth with a great border I wanted for the sampler.  So I kept pushing the food plates out of the way as they were set down to get that last repeat on my paper.  The day everything we owned was stolen behind the iron curtain on our honeymoon, I had decided to carry the in-process sampler in my day bag to use it to communicate in the hunt for new motifs and the needles I was running low on.  Now it sits framed on my wall - a tangible representation of the "For Better and Worse" part of our vows taken only days before.

Our Swedish friends we visit yearly were here recently and one of them exclaimed when they saw all the quilts on the walls as they remember me working on the appliqué blocks on each one of them as we traveled together for the last decade.  Nice to see what they turned into they said.   I am sure they will love the finished casket as that one has them scratching their heads, seeing two pieces of it grow in front of them so far.  And I know it won't be finished next summer either....