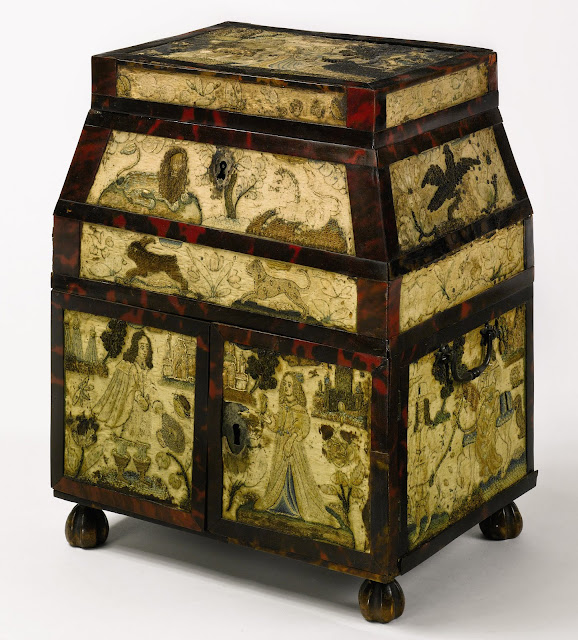 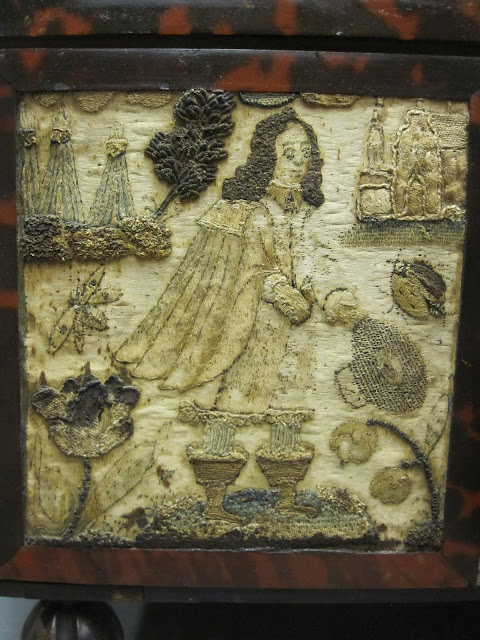 This tortoise shell edged casket didn't appear at first like it would hold a major discovery as I was looking at the sides and the interior.  The interior may have had some embroidery added to it later as it is out of character.  But as I progressed opening drawers and taking things out, I noted first that the pounce pots and ink wells had numbers on the bottom.  That was quite exciting as it added to my growing database of sizing numbers.  I believe that as the casket finishers were putting them together they had to make the sizes to fit pre-made items such as the bottles and pounce pots.  So they make them for a 3, 4, 5 or 6 - all numbers I have found on the bottom of these items.  They are evidence of a coordinated manufacturing infrastructure that would have been localized in one area to feed this casket obsession and turns on the head the idea that they were being made in towns all over the country.

As we looked inside the lid, I noted that the cavity was actually a tray and would be able to be pulled out - and it did!  What I wasn't expecting was that it was lined with a print and not with plain silk!  When I find prints, I get very excited as their are often clues on them to the print maker/seller or artist.  So far while I know that almost all of them were sold by Robert Walton or John Overton, printmakers of the day, I haven't yet been able to identify the actual print yet!  These were low cost prints that were often stencil colored by women working for them.  Very inexpensive.  This one really confused me as it just screamed 'Netherlands' with its subject matter.

Later on the train (which had high speed internet to go with its high speed -- WOW), I was reviewing the photos as I downloaded them to the computer drive and could magnify them.  The print was interesting and I started to look closely at it.  Very confusing as it both seemed the ships were on ice and in the water at the same time.  And then it hit me - the harbor WAS iced over and there was a man in the middle on skates.  A sled was pulled up to the edge of the ice with a load for the ship and in another place, two men were dipping funny sticks in the water.   I spent time looking at the history and prints of the little ice age in England - a time they had many frost fairs on the surface of the Thames river in London (1683-1684).  But this wasn't to be found in that thread.

I had just been to the monumental Dutch Masters exhibition at the MFA for a second time and had spent much time with Dutch winter landscapes and recognized this as that same genre - different from what was going on in England at the same time.  Views of daily life.  Then I focused on the scene on the right hand side and as my eyes acclimated to the scene and took in the details I almost screamed! 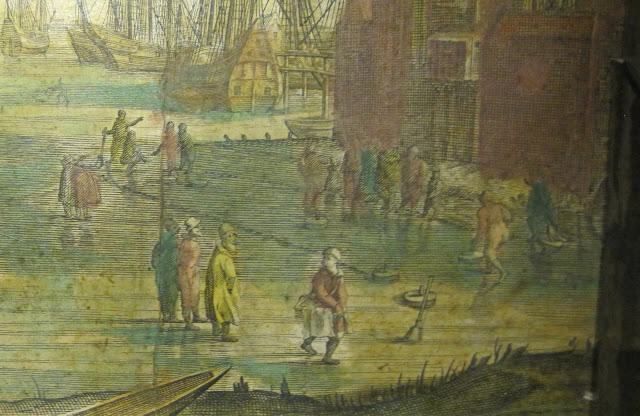 They were curling!!!  I thought that was a Canadian sport (or Norweigian's with funny pants - sorry for the obscure reference, my electrician from This Old House is trying for the US olympic team so I have learned a lot about it during our renovation).  Well - come to find out (thank you wifi at 180 mph), it was invented in Scotland and the Netherlands which were avid trading partners in the 16th and 17th century.  Those are stones or wood disks with sticks out of it.  Note the broom leaning against one and a person using one to melt the ice ahead of a moving one.

I was freaked out - could I find this print in histories of curling?  Was it the earliest known depiction? In fact - it is one of the four earliest known of curling!  It took some digging but I found it on the train.  It was a Dutch print called Winter and was dated 1613-1618 published by Hendrick Laurentsz. So we have the first identified print in a casket that I know of.  Now the questions multiply!  Why the early date, was the plate purchased by one of the English print makers and moved to England to use (that happened in England a lot) much later?  Much to be thought about now.

And what about those guys dipping the sticks into the water?  Well in the other early prints about curling, there are always men playing games on the ice - seems almost like hockey.  But it is the winter form of what would end up becoming Golf!!  They are trying to get their errant 'colf' ball out of the freezing water.  WOW.

I can almost feel Anita and Ervin smiling down at me today as I write this about their little secret about our sports history inside the casket that, at first, just seemed so regular.

Tricia
Posted by Thistle Threads at 8:00 AM