Wow - it is Tuesday and I am coming up for air.  The robot team has their League Championship on Saturday so last weekend was a blur of activity.  Presentation editing, notebook digitizing/printing, editing summaries, scripts, and more robot work than I can shake a stick at.  Some kids did seven hours straight just on notebook digitizing.  They were a bit fried.  The robot had 'barfed its guts of gears out' when I got back from Sotheby's and it was looking really bad.  Some of the changes to get another function it needed had made previously done functions not work anymore.  Five steps back to get one step forward.  So they were all working feverishly.  Still way too much work for this week after school everyday than we are comfortable with.  By Sunday night, I collapsed into a chair and really didn't care that my beloved Patriots had lost.  I was just too exhausted.  Yesterday I spent it mainly in PJs packing silk wrapped purls into boxes and making that sound 'duhhhhhh' that says you are fried.

One thing that brightened the day was watching PBS non-stop while cutting the purls.  And I came up on an advertisement for this week's Antiques Roadshow (and others emailed me last night as well!) where there was an amazing embroidered cabinet on stand to be shown.  A piece of stumpwork was also in the mix - but I didn't see it on the video.

You can watch it online.  The cabinet on stand is in the last five minutes of the show but there is a snip on the site too that I have linked. 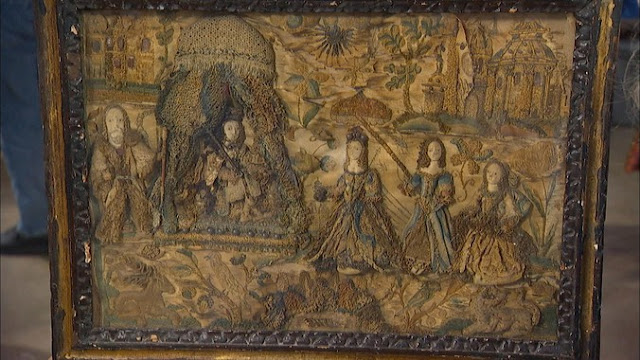 Posted by Thistle Threads at 9:58 AM