I have a great deal of material that I keep meaning to post about lovely caskets made by students in the Cabinet of Curiosities.  The students in the courses have access to a private NING chat site where they post discussions and pictures all day long.  So I often forget that those not in the course are unaware of the absolutely amazing works going on as a result of the course.  Some day I would love to see these pieces in person! 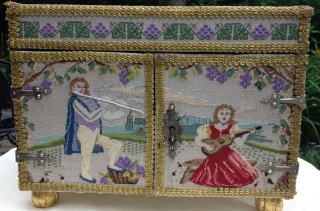 So today, I would like to add more about Edith and John Brewer's Casket.  Edith is a wonderful stitcher and loves to work 17th century band samplers (and is QUITE accomplished at it!).  Her inspiration for the design was a counted design by Tempting Tangles Designs, which she adapted for this cabinet.

Unlike the amazing casket worked by Janice Gail which used the Double Casket form we provide, Edith wanted to incorporate her extremely talented husband John into the making.  I think this is wonderful because it has truly become an heirloom for their children.  I sell the hardware and the locks to students who want to have a go at designing their own cabinet and interior. 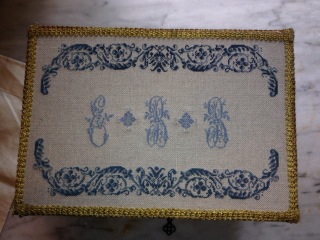 Edith used basically the outside dimensions from the templates that are available in the course and
then the two of them took it from there and used the pictures of the old caskets to work out the interiors.

John had quite a bit to say about the process and the lessons he learned making the casket as well as the terrific carrying case that goes with it (if you make one - you HAVE to take it around to guild meetings!!).  John's advice is laid out here:

"Making the boxes was a challenge and still is.  There were no plans, just measurements of the outside of the boxes. I had to figure out the thickness of the stock and used 1/4’ stock which I doubled for the doors. The many pictures were invaluable and still are. 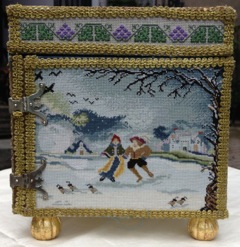 One mistake I made was not allowing enough leeway on the drawer to accommodate the paper or silk.  It needs more leeway than expected. I used basswood on one box and it is easy to work and sand.  I got a deal on beechwood on the other but it is hard and heavier.  I was able to reduce the size of the drawers enough with my stationary sander which has a belt and a disc.  It would be difficult to do this project without that power tool.

The ring holder in the hidden drawer I made too high so it will only allow for band type rings. The screws for the hinges would look better if they had smaller heads like nails. I agree the nails will not hold well.  In other boxes I have made I have filed down the heads of steel screws but that would take the tin plating off.  It was quite late in the 19th century before the advent of brass screws so one would not want the brass to show. It is important to produce a bevel at enough angle for the top lid to close well 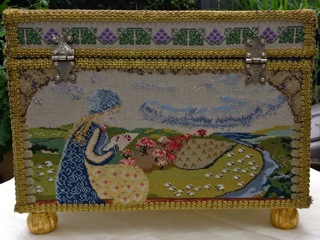 and allow for the covering. That is the bevel on the strips on the inside of the tray area just above the little hidden drawers.  I used a plane and sander to make the bevels. I did turn out some fake ivory bead shaped pulls for the drawers of the first box. Ivory or bone had been used for a long time for pulls and lid lifters. I had bought some bone ones from England years ago when I made an 18th pistol box.

I turned the feet out on a lathe and the put the groove in with a carving gouge. Gesso was applied and paint and then fake gold leaf.  It is not difficult to apply the leaf. A coat of shellac was applied over the leaf. One good aspect of having all the wood covered is revisions and repairs and mistakes can be hidden.  The tools I used besides the sander and lathe were a router (not a requirement however, a fine Japanese saw, chisels,  a small hand plane, a small #9 gouge, table saw, a square, many clamps, and a tack hammer. The frame was nailed and glued. An English author of a book on making rocking horses I have stated that “one 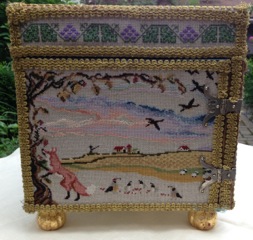 never has enough clamps” and he is certainly right.

It was a fun project and I had small bits of wood every where making the 2 boxes, one with a flat top and the other with a casket top. The carrying cases for the boxes were made out of 1/2” oak.  I then applied an ammonia solution which combines with the tannin in the oak to make it dark brown. A little stain was applied and it was shellacked."

I haven't yet seen John's Double Casket yet as I am sure Edith is madly embroidering it!  Hopefully we will be treated to a view of it once finished! 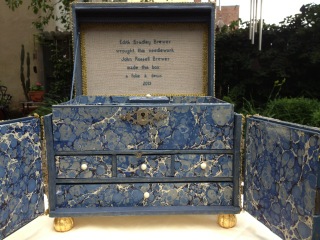 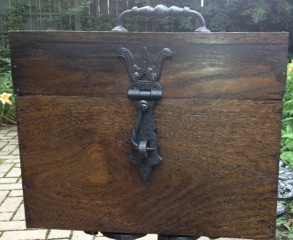 Posted by Thistle Threads at 2:31 PM