Pease Porridge in the Pot.... 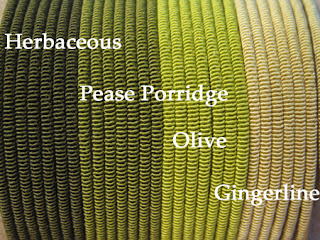 I know that many of you working with the lovely new threads we have been using for the Cabinet of Curiosities Course have been making some noise about how much green shows up in the 17th century designs.  There is the grass -- tons of hillocks! And there are the flowers, leaves, trees, etc.  This means that you really want more greens - greens in silks and other thread forms!

One of the things we did at first was note all the green types on the embroideries and knowing about natural dying of the time, we designed our first green family to include two greens that, while flowing in the family, could also be used to build off alternative families.  These were the 5025 and 199 color.  And we have been doing that!!  The stumpwork boxes that will be leaving here in August for the students will include the first wave of those threads and excitedly those will become available on the website at the same time.

BUT - the first of our silk purls based off two of the colors have come in!  This establishes an olive colored family that uses the Olive, Dead Gold and Gingerline as the light part of the family.  The new colors are called Herbaceous and Pease Porridge and are a dark and medium olive color.   The purls are not in the student boxes and I have limited numbers - but they are being added to the product line.

I also have the largest inventory I think I have ever had of silk purls with very few colors out of stock at the moment.  So if you have been waiting for purls to become flush again - the time is now.

The greens in Soie Gobelin are also finally done and on the site, but they will be included in the August kit that Stumpwork students will be getting.
Posted by Thistle Threads at 1:33 PM