This casket was a special gift from Irvin to Anita and the one she shared with me on my visit to her home.  It had a special place in her heart as she had admired it for awhile before Irvin had persuaded the owner to sell it to him as a birthday gift to Anita.  Having recently received a present like this - I can say that the surprise of something so unique and so to your core interest is amazing and makes one weep.


This piece is fascinating both outside and in.  While the silver embroidery is tarnished, the workmanship is wonderful and the design style must have piqued Anita's interest greatly.  She mused that it might have a Dutch influence and I have to heartily agree with her.  Immediately when seeing this and its arcaded panels with trees, houses and other foliage and animals 'grounded' in the top spaces, I am reminded of a particular professional embroidery house in Antwerp in the first half of the 17th century.  This house provided embroidered panels for cabinets that were sold into England and France as valuables cabinets and I feel were the inspiration for the school girl caskets that we are so familiar with today.  So could this be a transitional piece?  Or one made by the same house decades later for a client (whose arms are inside) when the style had transitioned to this shape.


It isn't just the shape of the arcades that are shared, but when I look at works that are similar and try to decide if they might be professionally worked (there is concrete evidence of the Flemish pieces being from one workshop in records in Flemish), I look to see if motifs and treatment of those motifs is consistent as well as the materials used.  A narrow material vocabulary is typical on professional pieces, part of keeping their inventory of threads and thus capital expended narrow.

The satin stitched flowers and curling stems with the way the motifs were treated show similarity to the inside of Anita's cabinet.  When viewing gloves worked by the same workshop as the Flemish cabinets, the similarity becomes stronger.  Unfortunately, I don't have permissions for those pictures in a blog.  It is the silver metal worked animals, fish and monsters that really resemble the treatment on the top of the casket.  On the top is a picture of Adam and Eve surrounded by silver worked padded animals.  The aquatic ones could be cut and pasted onto the Flemish pieces and you wouldn't even notice the difference!  Look close at the pictures I put up, you will see that the animals have what looks like damaged silk behind them.  It isn't - but it is the remnants of the silk that was embroidered to be the mate of that animal!  So it is two animals for each type.  I can't imagine that this wasn't noticed by Anita's eye for detail and charmed her. 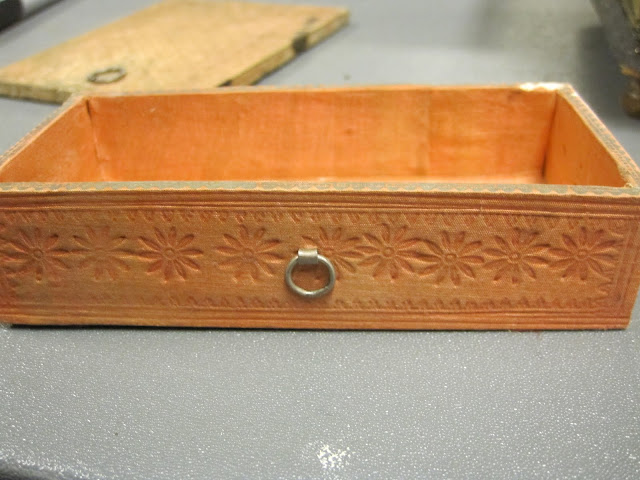