Kirsten Doogue has entered a little turtle thimble holder made from a walnut!  So cute and I had to award her 2nd place in the 17th century traditional toy category.  One of the things I really was attracted to was her use of several of the techniques required (lacet on the shell and the expanded bullion for the head).  But uniquely she took the lace techniques  shown on a MFA casket and used fancy needlelace stitches to fill the space in the tape lace she made front he lacet.  It was quite inspired to make it look like a turtle shell!!

In my house, I have a curio cabinet on the wall.  I have loved collecting item for it each with a little memory behind it.  This past August, I was pleased to add my own version of the CoC2 ceylon frog to it.   He was so fun to make, that I decided I needed to design my own small animal.  I had made a lace posey before, so I wanted to use lacets in a different way for this project.  Your provided that inspiration with the photograph of the lacet used as tape lace on a stump work garment.  I then pulled inspiration from a V&A needlelace purse made from a walnut shell (photo enclosed) and the tape measure casket toy you published.  I put all these ideas together and decided on a turtle with a walnut shell embellished with lacet and needlelace that could store needles and a thimble.

My final turtle had the following components:  The turtles head and tail were made of trellis stitch.  The backside of the trellis stitch was used as the front.  Glass bead eyes and bullion wire were added as embellishments.  Legs were silk wrapped wire also embellished with bullion wire.  A walnut shell was painted gold.  A lace covering was then created.  Lacet was used as the "tape".  A few different needlelace types were then worked in the open spaces using a mixture of Gobelins and Gilt Silk Twist thread.  Stitches included buttonhole with return, double detached buttonhole and triple knotted buttonhole.  A piece of wired silk trim (from the frostings club) was used to finish up the base of the shell.  To complete the compartment, felt was cut to make a pocket for the thimble, a shell bottom, and a place for needles.  The bottom felt piece was trimmed with lacet and a small loop was created to go around the tail to hold the bottom closed. 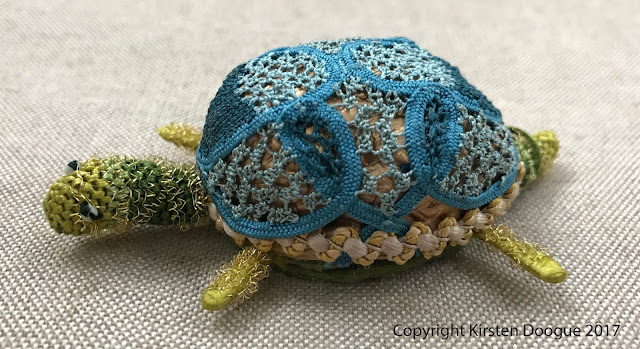 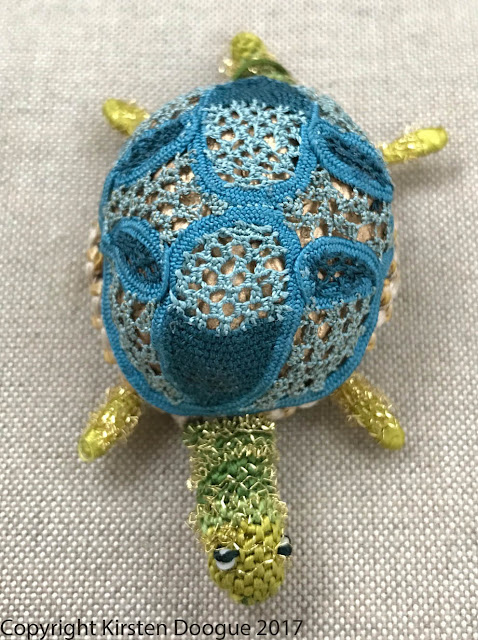 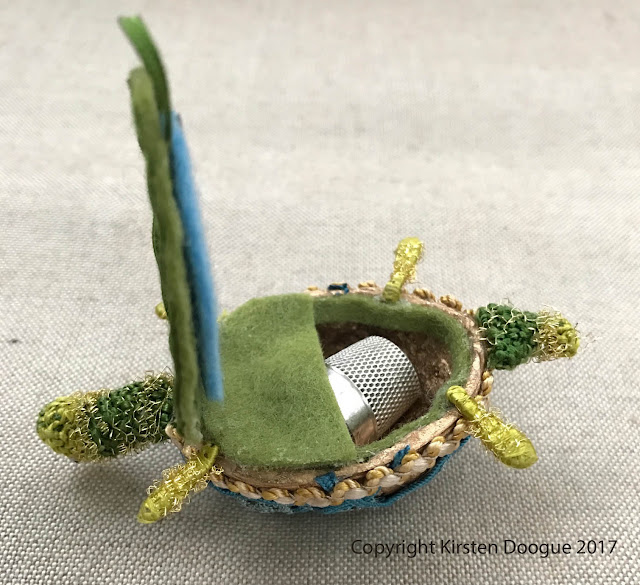