Today I will start with the first of the Honorable Mention Runner Up Winners and any additional entries they sent in.  I had 18 entries in all for the contest.

Today's Honorable Mention Runner Up is the Lavender Wand Pin Cushion by Catherine Jordan.  Catherine also placed two more entries into the competition and they deserve much love too as they are just wonderful!  Catherine will be getting a selection of embroidery publications in the mail soon! 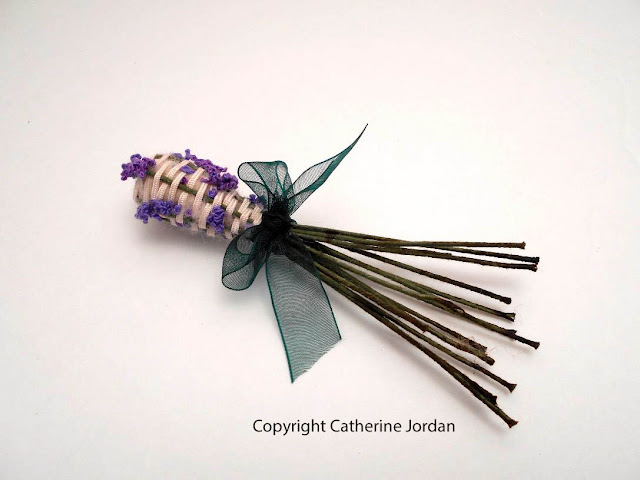 Catherine's 5" long Lavender Wand Pin Cushion was inspirational in how she used the lacet to cover the wool, making something that often is used for fragrance into a useful needlework accessory!

Lavender is a delightful fragrance, providing a calming, clean ambiance. I have fond memories of visiting a local lavender farm, having tea, and making lavender wands with friends. The fragrance of opening a linen drawer to a whiff of lavender is a special feeling. Making a miniature lavender wand that will last far beyond the dried wands, was fun and with the addition of essential oils, this miniature pin cushion will provide a special reminder of sweet memories from the past. 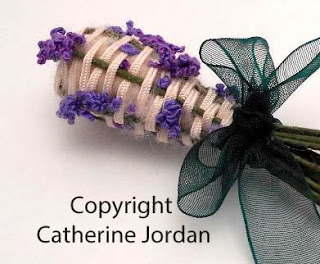 The stems which make up the structure of the wand are paper-wrapped wire. They were bundled and
tied together and then wrapped in merino wool to provide fullness at the top. The wires were then folded down over the wool and tied where the ribbon bow is now. Lacet flat braid was woven through the wires. Using 6 plies of lavender floss, Reverse Twist stitch and French knots were randomly worked into the lacing to give the appearance of the lavender flowers escaping from the wand. A green ribbon bow was added to finish the wand.

I think this entry was amazing in its use of custom dyed fabrics and layers of interesting threads.  I had been thinking of using soutashe in this way and am sooo glad that Catherine pioneered it! 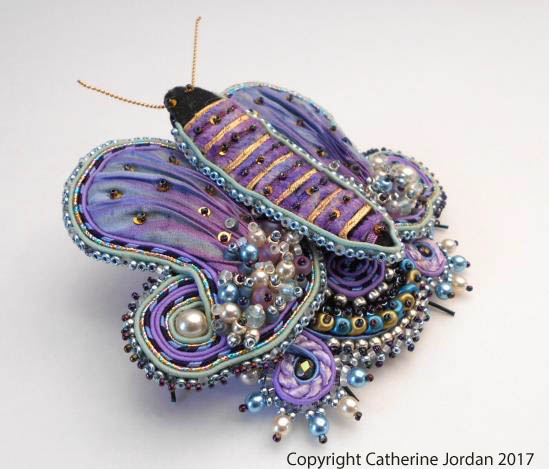 An online Soutouche class coincided with the Thistle Threads challenge and inspired this piece. Adapting this 16th century technique and combining the soutouche braid (also referred to as "Russia braid") and shibori silk with the various lacet, braids, bullion, and beads produced a highly embellished butterfly with interesting layers.

The wings and body were begun on a stiffened felt base and the shibori silk sewn on. Spangles and beads embellish the silk and the soutache braid finished the edges with more beaded edging. The Thistle Threads “Metals Trims and Beads Box” sampler included a wonderful variety of trims; The Gilt Russian Braid was wrapped with hand painted silk chenille to form the body and the antennae were made from expanded bullion. Wire was formed to make the legs so that the butterfly stands off the ground.

This piece is soooo sweet and lovely, playing off the game chip bags of the time period!  In this piece, Catherine needed lacet that was black and it doesn't come that way, so she used fabric paint to change the color!  Inspired. 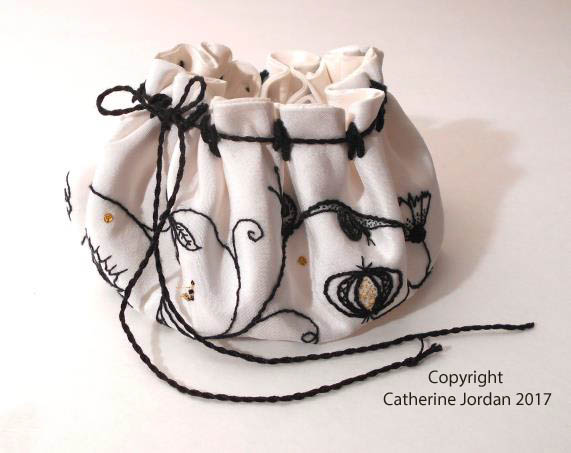 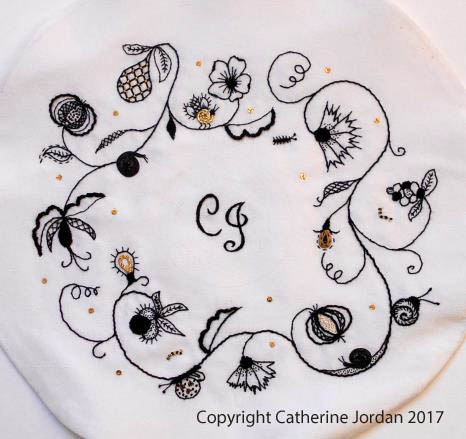 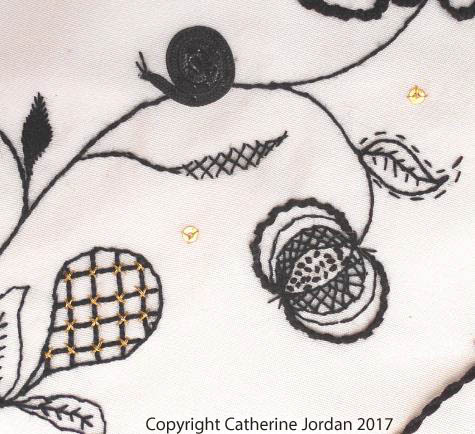 A toy bag was the idea that gave rise to this black work piece with the idea that it could be filled with dice, gaming chips, and a small game board. The beautiful black work of the 17th century inspired the design and adorns the bag with a variety of flowers, leaves, and insects with the maker’s initials on the bottom.

The Thistle Threads “Metals Trims and Beads Box” sampler included a mixture of purls, bullions, and special trims in gilt. The ground fabric used was white Chinese silk dupioni backed with muslin for support and lined with an additional layer of white silk dupioni. Lacet was painted black and used for the snails and a variety of braids were couched for flowers and bugs. Expanded bullion was couched for small worms. Stitches used included: detached buttonhole, double running, satin, seeding, French knots, whipped double running, whipped stem, lattice, straight, and double running. The maker’s initials were monogrammed on the bottom of the bag. A twisted cord was run through detached buttonhole loops, so that the circle folded into a soft bag. Clay dice and chips and a small gaming board were made to accompany the bag (not shown).

We can certainly all agree that Catherine's entries were just beautiful and so creative!  Congratulations Catherine for your winning entry!