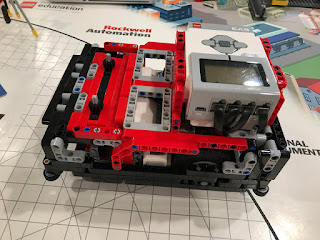 Their robot was a brick that could accept complicated mechanisms like hats that were put on top.  It had gears embedded in the top surface that were connected to the motors below and if there was a set of gears in the attachment, they would link up and the two motors below could drive them.  It was super compact and the wires were well managed.

We have a system that they use to design the base robot and the attachments that gets all the kids involved and divides up responsibilities so all the kids creativity and work is involved.  The solving of the board with a series of 'runs' the robot makes takes months of work - especially to make the robot work the same way every time.  Its Legos, you know!  They try all kinds of ideas to look for lines, reorient the robot against a wall, and generally all kinds of ideas to help the robot get back on track with the natural deviation off the trajectory that being a plastic machine engenders.  Since the robot has to go eight feet to the other side, just a few degrees off its heading can get the robot stuck somewhere.  That is what takes so long.

But think about it, by insisting that the robot performing the same task exactly and being fault tolerant (just like in the metal robots), we are teaching the kids to be detail oriented and to think of all possible avenues for failure and to come up with a solution.  Exactly what you want in a future doctor, autonomous car designer, or pilot.  After what happened this year in the metal robots - I said to someone that I would definitely fly in a plane these kids designed as I know they care about exploring all avenues.

That's what it takes to win the competition because when you get there, you find the event staff have almost always built a model wrong, installed one wrong, and that the tables themselves have holes or knots in the wood that make the robot go over a bump and veer off course.  We simulate that by putting stuff under the matt, putting a book under the corner to make it off kilter and not declaring victory for our robot until we have either taken the stuff off the table and turned our table (so variations in the plywood surface are somewhere else) and gone to a different team's house to run our robot on their homemade table.  That's why they haven't lost a robot game at any competition in four years.

So the robot did amazingly at competition and they won the robot performance award for top score at the qualifier.  But it wasn't good enough for them - the first run just never ran well enough on all the different tables (you have five runs, switching tables) and so back at home the next morning, they threw away four months of work on that run and totally redesigned it and its attachment - and got it running and trained with it in two weeks.

There are 535 points on the board.  They had designed in 460 points as what they could get done in four months.  The hope was to advance to the Worlds and then take the next four months to get the rest of the 75 points within the 2 min 30 sec they had to run the robot.  Seeing that the German 17-year olds were only putting up 340 points at their championships - we knew we were doing really well.  Here is a video of the night before competition when they got several perfect runs in a row.  The second run shows that driving team is even smother and had excess time left over at the end plus overlays of the methods used to keep the navigation of the robot on track.


As a casual observer, you might notice that there were two different driving teams - this isn't the norm.  Also the kids were all clustered around the table while it was running, each doing a different task such as being the ref, score keeping, time keeping and generally watching closely to see if the robot made a mistake so they could diagnose.  These are all techniques we use to make every member of the team highly tuned.  It is hard to design or program if you aren't up on the details.  And by all driving on the team - they all have to hold themselves close to the level of the best driving team.  In other words - be a team and be 'all in', not a hanger-on and on the team in name only.  You can also see the general affection - and remember - this is the night before the state championship that they are hoping to win.  Preparation, preparation, preparation makes for lower stress.  That was the eighth night in a row they were there after homework was done.

The mechanisms that they developed this year were truly inspired.  I love this one as it is the idea of one of the girls and there were five versions of it until this last one and I think four kids were involved in the building and perfecting of the versions.  It has to flip the manhole cover and keep it in the circle - it was a task that almost no teams attempted.  The big problem was there were two manhole covers and so somehow this device had to go over the bridge in the middle of the field - but it had to be close to the ground to flip the cover.  So the kids devised a 'drawbridge' like system that if they lifted an arm in the back it pulled on strings that would lift up the manhole flipper while they crossed over the bridge.  No matter what, when crossing the bridge the robot would get wonky so they programmed a series of moves to look for lines to square the robot up again and get back on heading.  It was incredible.

This is a video of the mechanism.  One thing we use extensively is the slo-mo video function on their phones.  One kid will film the robot doing something that isn't working all the time so they can then see the action in slow motion and figure out why it isn't working.  They use this really effectively to fine tune their programming and mechanisms - this was an example for the judges.

At the state championship, they had the top three scores of over 100 robots.  They didn't make their 460 because one of the main models wasn't built correctly on the tables.  Ours was - we have a dad who is a master lego builder (an official and rare title from Lego).  He examined ours and realized what was off.  But we still had a score that put us with the top five teams in the world at that point.
Posted by Thistle Threads at 8:50 AM