You can't get cooler experts than we did this year.  Our first expert was David Breashears,  a Mt. Everest legend, author, and filmmaker.  He got on Skype with us and the kids talked with him over an hour about their ideas and the detailed expedition logistics.  He started us off with the beginning in Katmandu and how people and stuff get where they are going and how hard and dangerous it is.  We had pages of notes about every base camp, the top, the dangers, the data and logistics.  It was awesome!  At that point the kids had a real prototype they had on the table and film footage of it working.  That was when David got excited.  While the 'personal' solution we were chasing was obviously not going to work because the climbers above Base Camp 2 melted their own ice but did it overnight (they climb during the day hours) - he got super excited because our solution would work in main Base Camp and solve what was becoming a problem that had closed the mountain for two seasons in the last five years.  He wanted to see us succeed and told us the experiments he needed to see to get one of them up the mountain.  What he wanted was an array of these solar cookers at base camp to take care of the water needs of the hundreds of acclimatizing mountaineers at that point.

Then David launched into the REAL story of what was going on at Mt Everest and we landed on our real problem of the human water cycle - the danger to the Sherpa people.

High altitude mountaineering used to be something that only the most extreme adventurers did and they shared the risk with the Sherpa people they worked with.  Note they didn't share the credit - but they did haul much of their own stuff.  That balance shifted decades ago and anyone who was rich and could afford the $90,000 fees to the Nepal government and expedition companies and two months vacation to fulfill a bucket list item could get to the top.  It is still freaking dangerous and some die, but they expect a 'luxury experience'.  That means that the Sherpa people are hired to haul their stuff up to the mountain over those crevasses and cook and melt water for them.   The result is that the Sherpa mountaineers go over the dangerous ice falls 30 times a season whereas a westerner mountaineer will do it twice.  And death is all in probabilities - so a Sherpa is 15 times more likely to die on Mt Everest because they are doing the heavy hauling.  Most of that hauling is the 35 pound propane tanks for base camp.   I think the best way to describe the problem is to put here some of the slides the kids used in their research presentation: 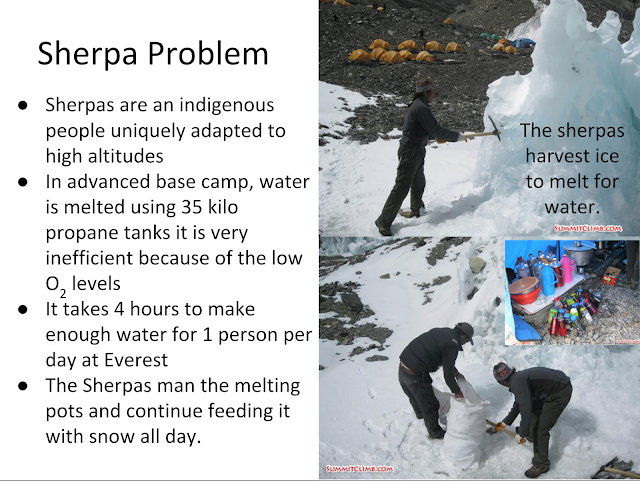 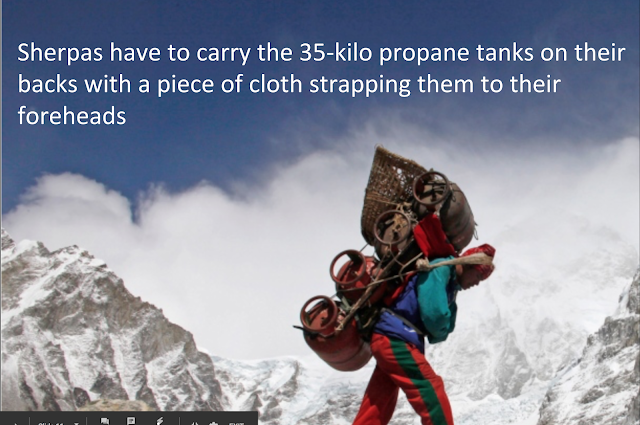 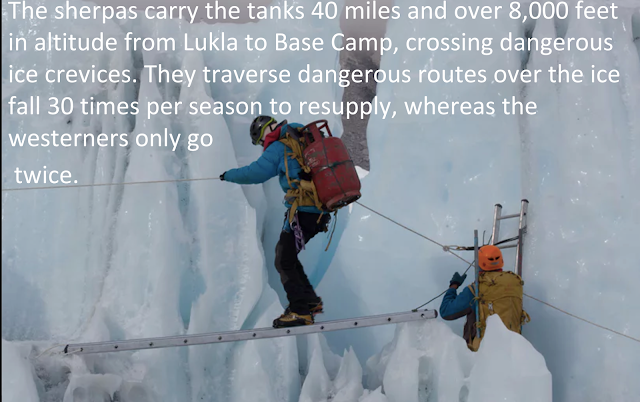 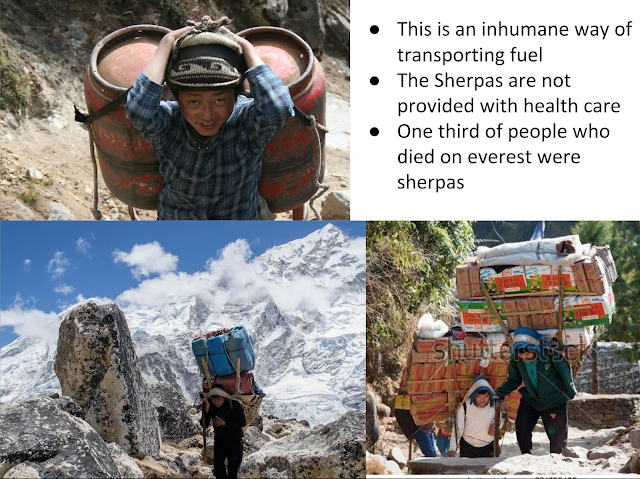 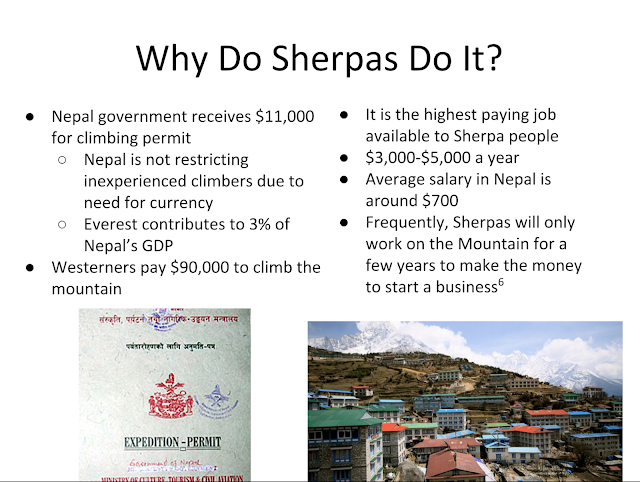 David alerted us to the 2012 season where 12 Sherpa's died in one day and the mountain was closed because of a revolt and fight on the mountain between the Nepalese people and the westerners.  As any exploitive situation goes - the people need the money, aren't being paid for their risk, and the westerners aren't helping the situation enough.  When a Sherpa mountaineer dies, his family has to use all their resources for an expensive funeral and trying to find the body.  As their religion is one of reincarnation - it is super important and often leaves the family destitute.  It is only $8000 for a proper funeral and there is no insurance for the Sherpa climbers.  And today, they are hauling HD TVs up there for the westerners to watch while acclimatizing.

David pointed us to a movie that was being filmed that 2012 season on Everest which was following one of the most famous Sherpa guides and it turned from a movie about his 21st accent to the top of Everest into one about the plight of the Sherpa people.  It is on iTunes and it is REALLY worth watching (hey, if you read my blog enough you get movie reviews for stitching!).  It is called SHERPA.

We cued up movie night again and the kids were just stunned.  And a renewed vigor about solving the problem occurred - they were now very emotionally invested.  That's where our next two experts came into the story.


Watch the trailer for the movie here.  You will be able to feel the emotion of why we are done with competition this year - but we aren't done with our project yet...
Posted by Thistle Threads at 11:50 AM