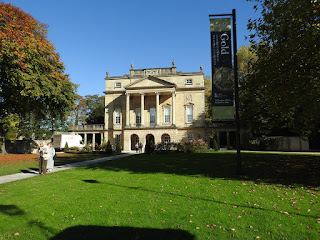 Day 7 of the trip was spent in Bath.  We had two stops, first the Holburn Museum and then the Museum of Fashion.  At the Holburn Museum, we had the opportunity to view at least nine wonderful pieces of 17th century embroidery on display (how many of you have visited Bath and missed this?!) on the second floor of the museum.  This included the stunning beaded basket that our beaded basket project helped purchase. 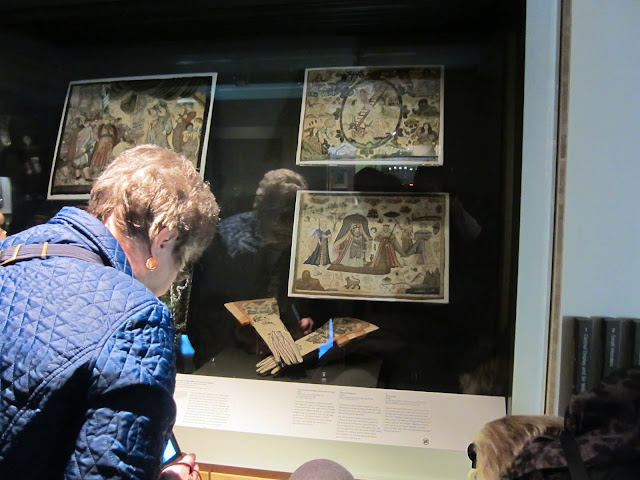 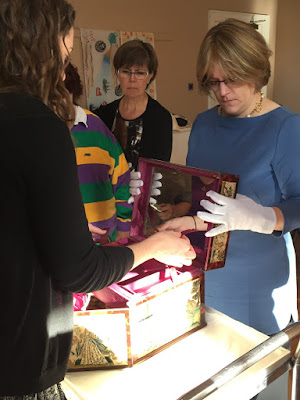 We also went behind the scenes and see a lovely embroidered casket in the collection as well as a piece by Leonora Jenner, a early 20th century embroiderer who did her own reproductions of 17th century stumpwork mirrors, pictures and caskets.

While the casket has had its interior recovered in the past, the piece was lovely on the outside with both stumpwork on the sides and a full counted work top.  It was fun to see that and how tent stitch, cross stitch and queen stitch could be used on what normally would be a stumpwork design and yet was so pleasingly effective; many tour participants were excited about this.

The inside was fun (I couldn't see it for the longest time as I was the designated holder of the lid) and had a compartment that was mirrored with checkered floor, like Flemish cabinets of the early 17th century.  It was obvious to Richard and I that it could come out and we convinced the curator to pull it out - revealing three additional secret drawers in a configuration I hadn't ever seen before.


Posted by Thistle Threads at 1:26 PM