From Sweet Bags to Bookmarks, Lacet as a Versatile Media

While these items weren't found in a casket, that I know of, you can imagine them being kept in a embroidered cabinet or made by the same young ladies.  So I will call them 'legal' for my contest as they would fit.

Bookmarks are an item that are found in embroidered bindings which are primarily made from lacet.  In the 17th century, a bookmark was a roll that was embroidered over, usually in a woven or tapestry stitch or the same method used to cover sweet bag tassels.  This roll was put parallel to the spine of the book and the half-hitched lacets that were attached to it were placed in between pages.  Since most books carried around were devotionals, psalms, and bibles; this made sense as you were keeping track of often referred to passages instead of where you were in the book if reading it straight through.

One particularly amazing bookmark is the one offered by Cora Ginsburg in 2009.  It came with a tapestry covered book of psalms showing Adam and Eve.  The lacets were finger braided with phrases in them worked in a contrasting color.  There were two sets, divided by the red one which said "Anne Hopkins, Her Book August [ ] 16 [ ]6.  On the left the strands are all biblical quotations from Colossians:  "Wives, submit yourselves unto your own husbands, as it is fit in the Lord" and "Husbands, love your wives and be not bitter against them".  The right side are couplets from George Wither's 1634 publication 'A Collection  of Emblems'.  They say:  "They after suffering shall be crowned/In whom a constant faith is found", "Even as the smoke doth pass away/so shall all worldly pompe decay" and "Take wing my soul and mount up higher/For Earth fulfills not my desire".    One wonders if Anne made these herself or if she went and ordered them up from the silk woman.  Perhaps one of the women who produced the how-to manuals on finger braids which now reside in the MET collections.

I would love to see a few bookmarks made!  The collection of lacets that we have would make a really lovely one.  Get those creative juices going! 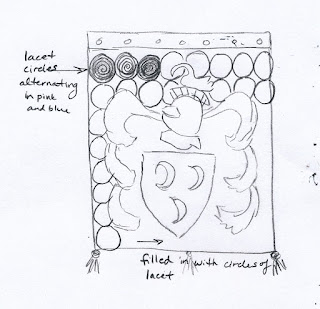 Another item that was quite surprising on my travels through private collections was a sweet bag that
had its background made entirely from lacets.  I don't have permission to show a picture of this lovely bag and no end of searching the internet and auction records has produced it.  So I have drawn what it looks like (excuse my kindergarten level skills!).  The bag was a cream silk that had a overlay of circles made by stitching together spiraled lacet that were joined at the edges to make a 'fabric'.  The entire front and back of the bag was covered in this fabric of joined circles that were roughly 1/2" in diameter.  The circles alternated between a medium blue and a pink which I think was faded from a brighter (medium) value.  Laid on top of the circle background was a needlelace coat of arms made in silk and silver threads.  It was quiet stunning and highly unusual as I had never seen a sweet bag like this before.  Again... I post it as an inspiration to those who enter the contest!


Posted by Thistle Threads at 8:00 AM