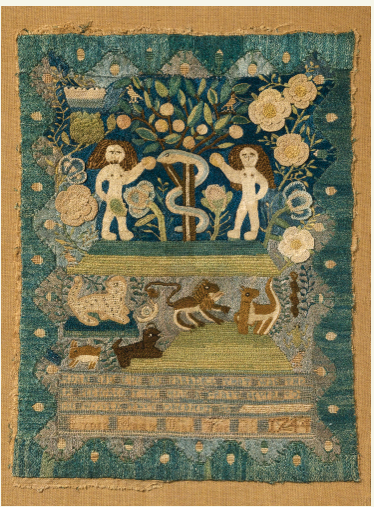 I managed to finally get to NYC Thursday night (Storm Janus caused transportation havoc) for the Winter Antiques Show and Americana auctions at Sotheby's.  I am glad I got there as I had the opportunity to see the wonderful folk art as well as one of those amazingly rare samplers that has it all - color, condition, graphic appeal and rarity.  I must have stood in front of this piece for almost 20 minutes marveling at it.  Ok, I coveted it in a big way!  It had been at the American Folk Art Museum as a promised gift of a famous folk art collector who unfortunately is now in jail and his collection was being auctioned to pay debts.

This was a Boston sampler from 1744 and I believe it wasn't exhibited in Pam Parmel's landmark exhibition of Boston Colonial Embroidery at the MFA Boston in 2011. (Read an article by MFA Boston curator Pam Parmel on the exhibit here with lots of pictures).  It's cousins were, and so the style was well known to me.  This piece out shown them all as the silk amazingly was the same color it was when stitched as well as done so well.  Graphically it is really stunning and the inclusion of the detached needlelace flowers is fantastic. Pan Parmel has theorized that these samplers were derived from 17th century samplers that may have been in the possession of the teachers at the time because they do not follow the progression of the early 18th century samplers of the English tradition.

There have been only a handful of embroidered samplers which have sold in the six figures ever.  One that was also in this type of condition and worked by the daughter of the man who rowed Paul Revere across from the North Church for his ride was sold a few years ago for this level.  Again, it had 'everything going for it'.  This piece was estimated at $30,000-$40,000 but it went for $233,000.  I would have liked to have been there to hear the buzz yesterday in the auction room.  $30,000 now sounds like a bargain.  But I am so happy to have seen it, especially as so many of our pieces that survive are devoid of the exuberant color that only little girls could have imagined going together.  I just might have to work a piece in these dark and bright colors myself.  I love the line up of the animals in the garden of eden, look to the far right and you will see a tiny frog stitched just above a small bird.

Secretly I hope that the MFA Boston was bidding and won this piece so everyone would be able to enjoy it some day, but I doubt that they had the acquisition budget for this level. 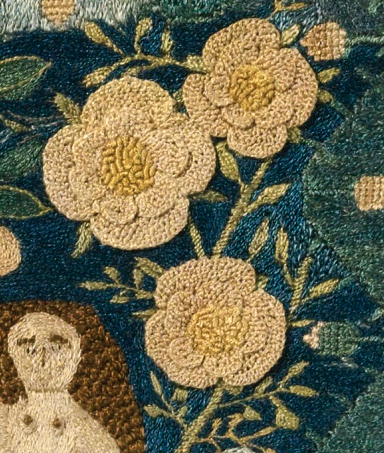 Below are the catalog notes from Sotheby's on this piece.  You can go to their site and use the zoom function to enjoy the piece and its lovely stitching and color from home.  Remember that this piece is only the size of a sheet of paper!

Lydia Hart worked the most visually appealing example within Boston's earliest known group of samplers which presently dates from 1724 to 1754. Nine pieces portray nearly identical figures of Adam and Eve above similar beasts, birds, and bugs. They also include elegant renditions of the Scottish thistle and Tudor rose, signifying the 1603 union of Scotland and England upon the ascension of James I (1566-1625). Lydia's work is the first to have what became a characteristic border for these and later eighteenth-century pastoral samplers, but its solidly worked background is unique. Earlier pieces by Mehetabel Done (1724), Martha Butler (1729), and Abigail Pool (1737) depict Adam and Eve beneath borderless alphabets and band patterns. In 1734 Ann Peartree and Elizabeth Langdon worked nearly identical borderless pictorial samplers with similar motifs on brown linen. More closely related to Lydia's work are samplers by Rebekah Owen (1745), Sarah Lord (1753), and Mary Lord (1754), with the same borders and gardens.2 Rebekah and Mary worked the same inscription as Lydia. Lydia's identity remains uncertain. The Lydia born in Boston to Elias and Lydia Hart on September 12, 1719, is unlikely to have worked this at the age of twenty-four.3Among the nine pieces described, the known ages of six makers range from nine to thirteen years.