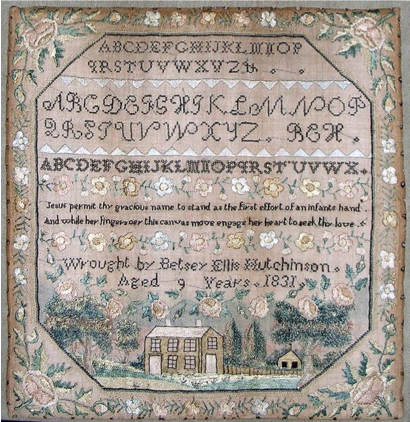 I've received a notice of a new sampler exhibit in Massachusetts.  To see some of the samplers that may be exhibited, take a look at a few of the pages on the Pilgrim Hall website from their previous exhibits.

Pilgrim Hall Museum owns a collection of ten needlework samplers dating from 1653 to 1832 which will be highlighted in the 2014 temporary exhibition Needlework Samplers: Wrought by Tradition. More than sixty original samplers from Pilgrim Hall Museum, other local historical societies and museums, and private collections from around Southeastern Massachusetts will be on display in this exhibit, representing one of the largest and most diverse collections of samplers ever put on display in the area. Many of the samplers which will be on display are rarely seen by the public. As the centerpiece of the exhibit, the oldest documented piece of American needlework, a band sampler made by Myles Standish’s daughter Loara in 1653, will be on display. Other notable samplers on display will include several examples of the local “Plymouth School” variety with their distinctive octagonal borders, sawtooth patterning, and floral elements and several samplers that mention not only who the maker was but also the town where the maker lived.

Samplers were sewn with silk or wool thread on a piece of line or wool by young women and girls as a way to not only learn needlework but also to show off their skills and ability. Samplers as a result are often stunning examples of artistry, combining many different stylistic elements, designs, and motifs. This exhibit will use samplers from Pilgrim Hall Museum and the other collections to explore these types and styles. Dating from the seventeenth, eighteenth, and nineteenth centuries, these samplers will show how intricate and artistic these personal works of art could be. Many of the samplers were “signed” with the sewn-in words “wrought by” and the maker’s name, providing the inspiration for the exhibit’s title. The exhibit will be structured around the traditional thematic elements found in sampler artwork: the original narrow form of the band samplers; the decorative use of flowers, trees, and floral borders as motifs; the inclusion of buildings, figures, and scenes whether real or imaginary; the use of words and letters; and using samplers as expressions of history and genealogy. Samplers were the work of a teacher and a student working together, much like the master and apprentice relationship of other early American craft traditions such as furniture making, silversmithing or gravestone carving. The young women and girls who created these samplers differed widely in their skill and ability, but whether finely sewn or filled with mistakes, each sampler tells a story of an individual creating an educational, decorative, and very unique work of art.
Posted by Thistle Threads at 8:38 AM