China Through the Looking Glass

I had the chance to get to New York this last weekend with my family.  I stole away twice for a brief time while they were at another museum to see a few embroidery/textile exhibits that are showing in NYC.

You must know about the China Through the Looking Glass exhibition because of the endless parade of pictures of Rihanna and others walking the red carpet at the MET Gala.  That Gala every year is the kickoff of a Costume Institute exhibit; usually they theme dress for it.  This year's exhibit is situated in an unusual way in the museum; taking over a dozen regular galleries with the haute couture dresses inter dispersed among the Asian artifacts.  It is a really lovely way to do it - show the objects next to the decorative arts that became the inspiration for the designers.  The pottery room is particularly stunning in my mind to turn your head one direction and see the wares and then the other and see the blue and white all over the dresses - the inspiration is so much clearer that way.

The exhibit also overwhelms with full wall videos of Chinese film segments and music that relate to the inspiration as well.  In the basement four walls of floor to ceiling video with opulent scenes of The Last Emperor are juxtaposed with the couture in front of looking glasses containing the
emperors' robes and other court robes that inspired the dresses in front.  The amount of court embroidery and couture embroidery on display is almost overwhelming. 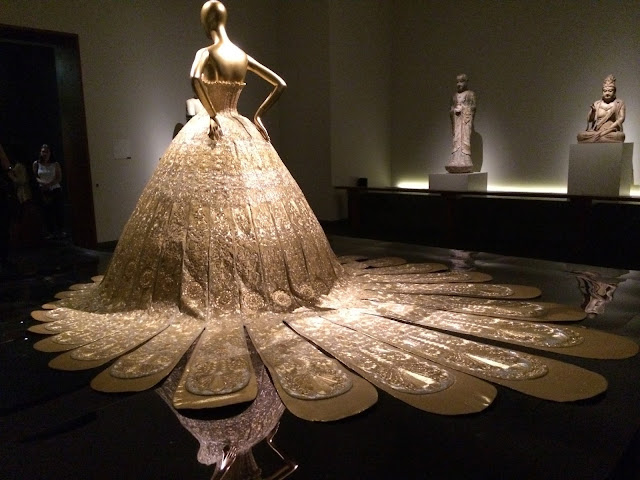 While I really enjoyed many of the rooms, the one that just blew me away was in a room of buddhist sculpture with a dress, called Magnificent Gold, from Chinese designer Guo Pei, the same designer who made Rihanna's embroidered dress (Her Chinese plate dress was my favorite as well).  It was so visually stunning that it wasn't even until I reviewed the photos later at home that I realized it was inspired by Chinese fans!  The entire thing was embroidered in gold thread.  It was the only dress in the room because it would have overwhelmed anything near it.  Stunning and one of the dresses I wanted to see move down the catwalk.  The Beijing designer is creating huge waves with her embroidered extravaganzas based on cultural references from her home country.  Watch a brief recap of her 2013 show (which includes few pieces from the MET exhibit).   The Huffington Post had a nice article with dozens of her richly embroidered designs at the bottom.  For those of us who want thread and skills to remain alive, designers like this are a huge part of the solution, making it cool and providing enormous amounts of work for the craftsmen and manufacturers.

The exhibit can be seen in video form on the MET website as well as pictures of some of the items if you can't get there before it closes on August 16th. 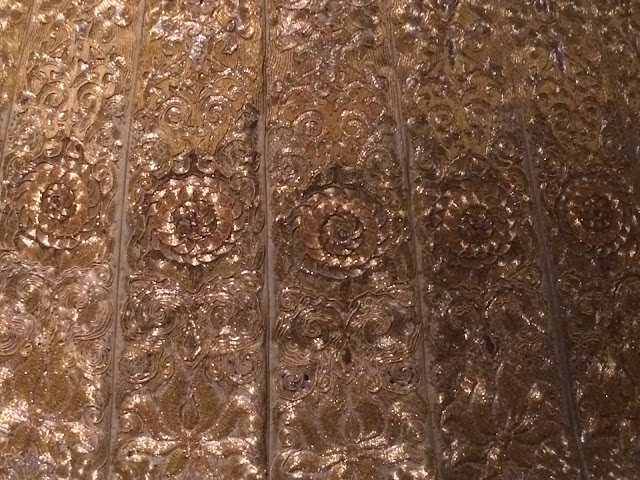 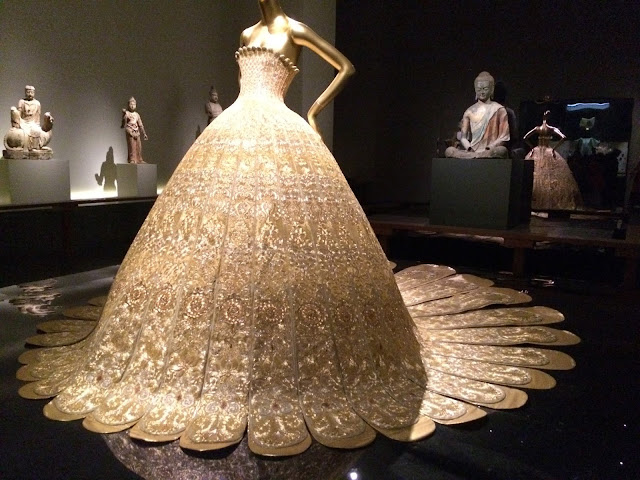 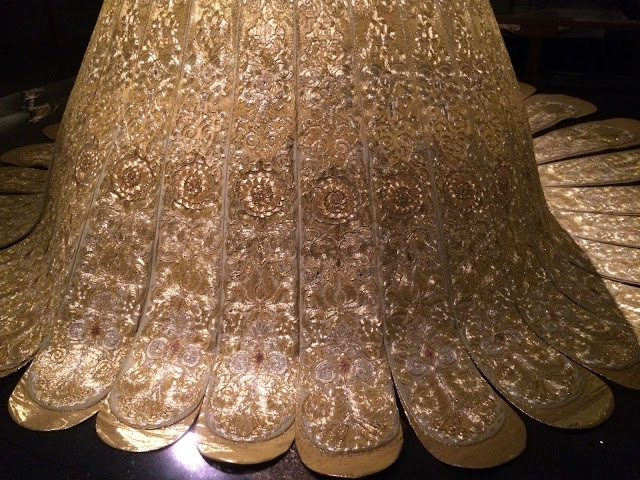 Posted by Thistle Threads at 7:55 AM