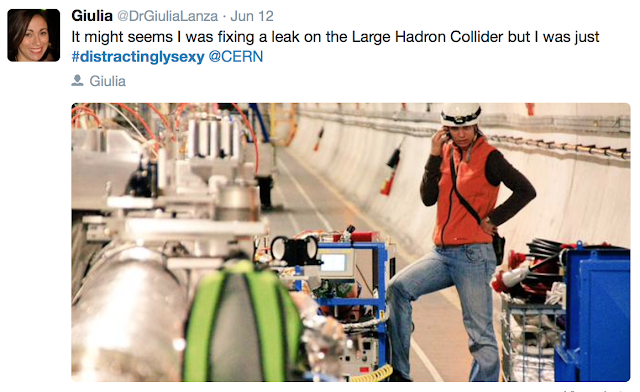 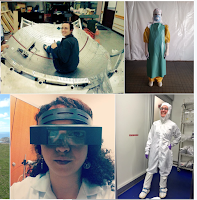 All it took was an enormous large Nobel foot in the mouth for a wonderful outpouring of female pride in their technical work this week.  The Twitter hashtag #distractinglysexy is a fascinating outpouring of humor filled protest over Sir Tim Hunt's speech to journalists in 'honor' of women in science last week.  If you have been following this current event, Sir Hunt managed to trivialize his experiences with women in his laboratories as one long soap opera event that would justify single-sex laboratories to take the pressure off their male colleagues.  It was an astonishingly stupid set of comments, which after resigning today from his post, he said he stands by - as having women in the lab results in too many tears.

I have found pouring over the now 10,000+ tweets fascinating.  Young (and old) women scientists and engineers are taking pictures of themselves at work and posting them to #distractinglysexy with 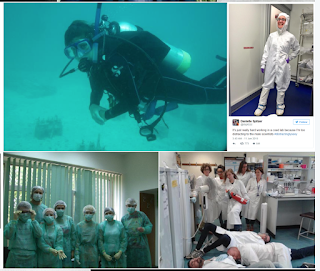 comments like "Sorry guys, I know this clean room suit is so revealing #distractinglysexy".  Not only are the comments pithy, but the shear range of careers where these women are working is just AMAZING.  There are pictures of women in the bush tracking cheetahs, doing liver transplants, sitting inside giant solar death rays, fixing the Giant Hadron Collider, knee deep in archeological digs, in hazmat suits, as firemen, fighting ebola, taking core samples, in scuba gear, on icebergs with huge emperor penguins behind them, and it just goes on and on.

In some ways this would an amazing anthropological or sociology project collecting their images and how the world doesn't see these women at work.  Very empowering for anyone who has ever donned a bunny suit (the dust type), had to wear a respirator to work, owns a hard-hat, or tried to explain to a little girl how exciting, adventuresome and sometimes dangerous being a scientist/engineer is.  Not the typical image. 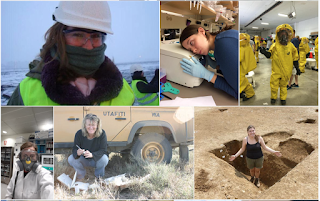 Today I was watching a NOVA Science Now where the host was testing out alternative gravity situations for a hypothetical Mars mission.  He was placed in a spinning room.  My son was there and going 'COOL, I would love to try that'.  I laughed and said - 'you did,  I was in that room in while pregnant with you'.  Of course when I was pregnant with the second and my job required me to jump out of a low helicopter in a swamp, we had to draw the line... I was already 8 months along.  My kids see me as a much more staid person now - but I think I have ridden in more real-flight simulators than they have played.  So I love this twitter feed - while they might not look glamorous, it sure is showing that there are some major bad-ass ladies out there.


Posted by Thistle Threads at 9:36 PM