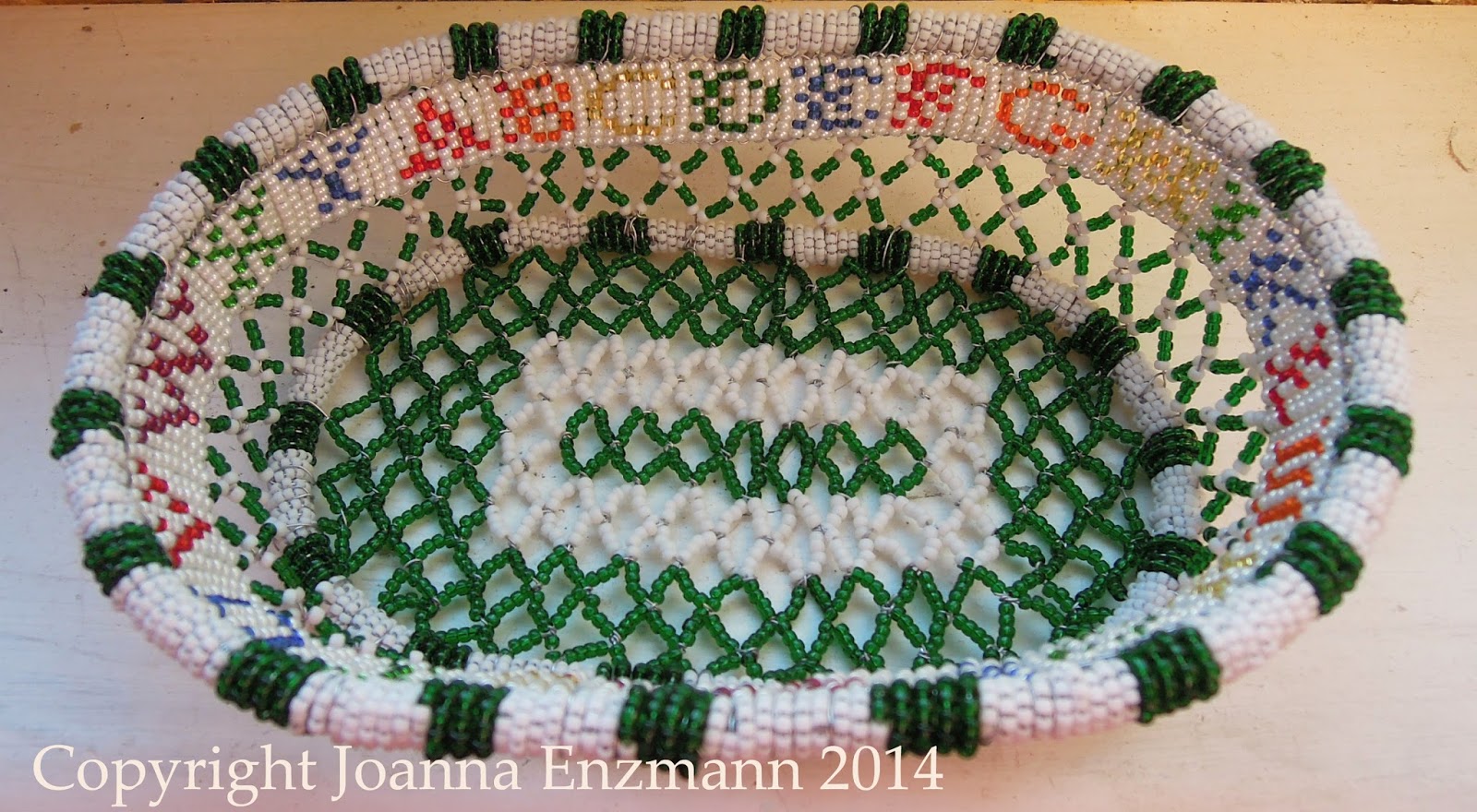 Our first winner in the 17th Century Traditional Basket category is Joanna Enzmann of Massachusetts, she used a second boarder of woven beads in a sampler alphabet to embellish her basket.  As Joanna mentioned, there just wasn't enough room for the last letter - Z - around the piece.  But no matter, it is lovely! 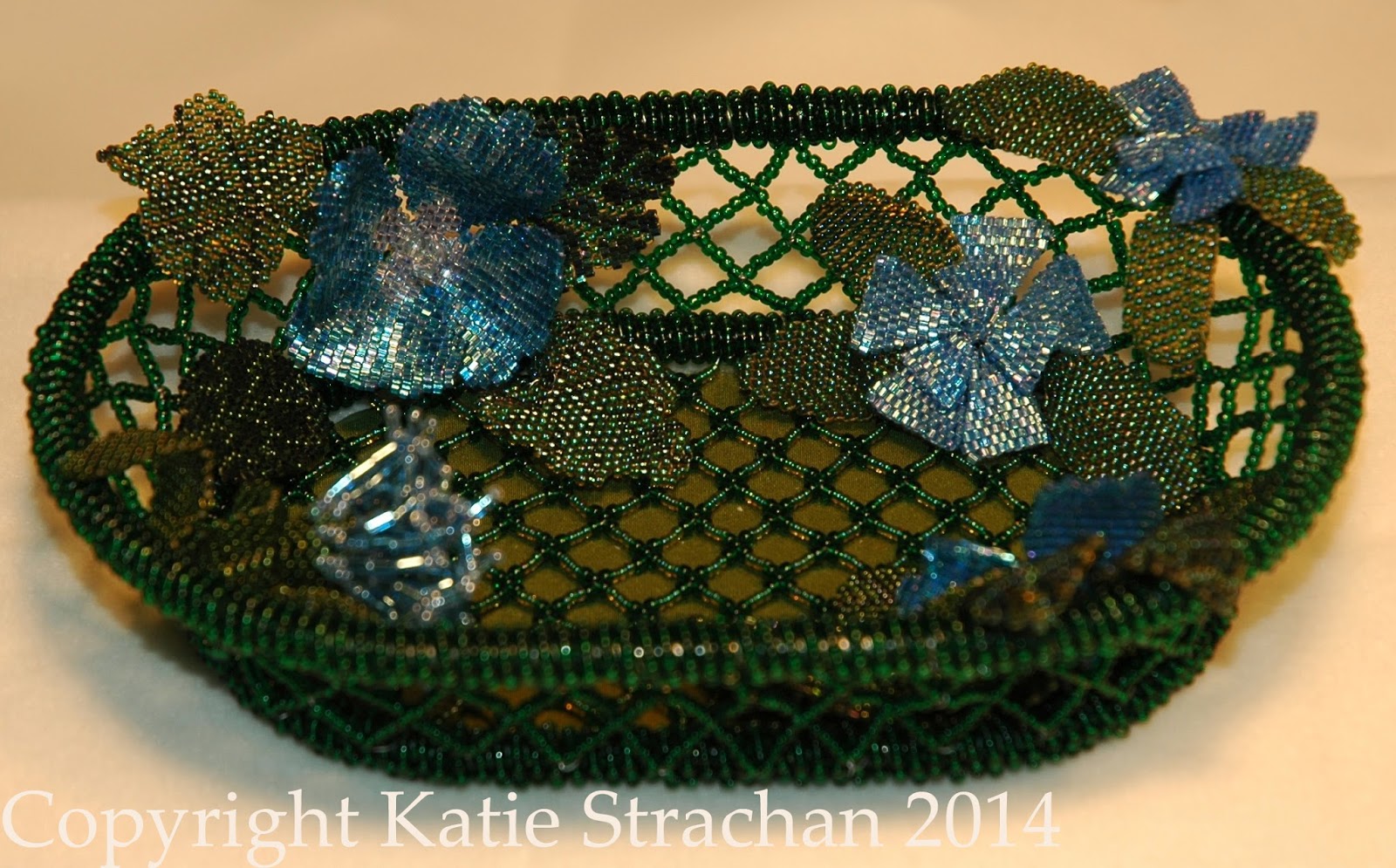 gave us the inspiration for her basket: 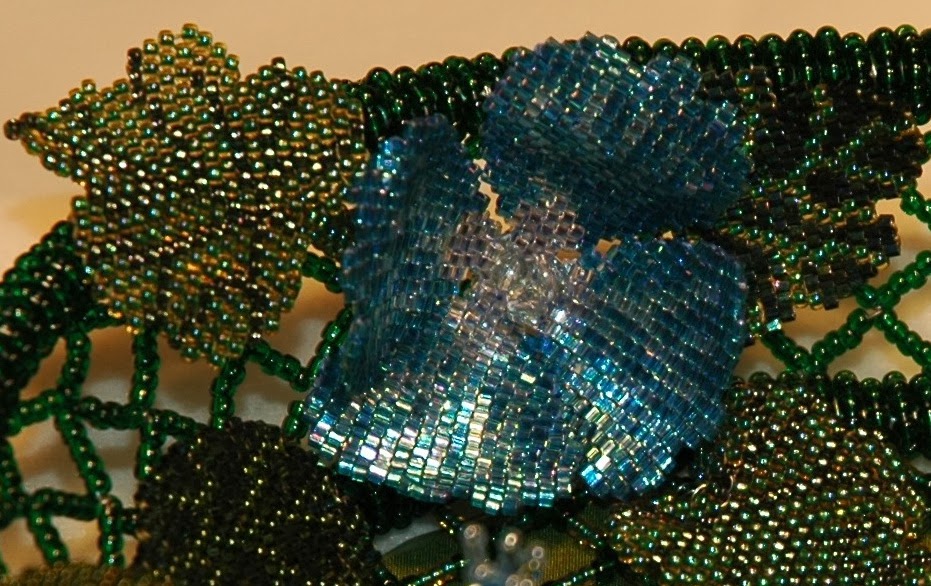 This basket was inspired by the themes of love and courting couples on many historic baskets.   It made me think that a basket might be the perfect gift for an important anniversary.  In the 17th century baskets were made by young girls celebrating young, beginning love – an engagement, perhaps a marriage or a christening.  It seemed fitting that so many years later, a decorated basket would be made to celebrate love fulfilled – my parents’ 40th wedding anniversary.

In designing this basket I adapted historic elements – netted bottom and sides, sprays of peyote stitched flowers and leaves decorating the interior of the basket – to the modern tastes of the recipient. I was inspired specifically by the MFA Boston basket (fittingly, labeled as a “gift basket”), its slightly darker color scheme and the sparkle of the beads.[1] The first elements I beaded for my basket – the pair of 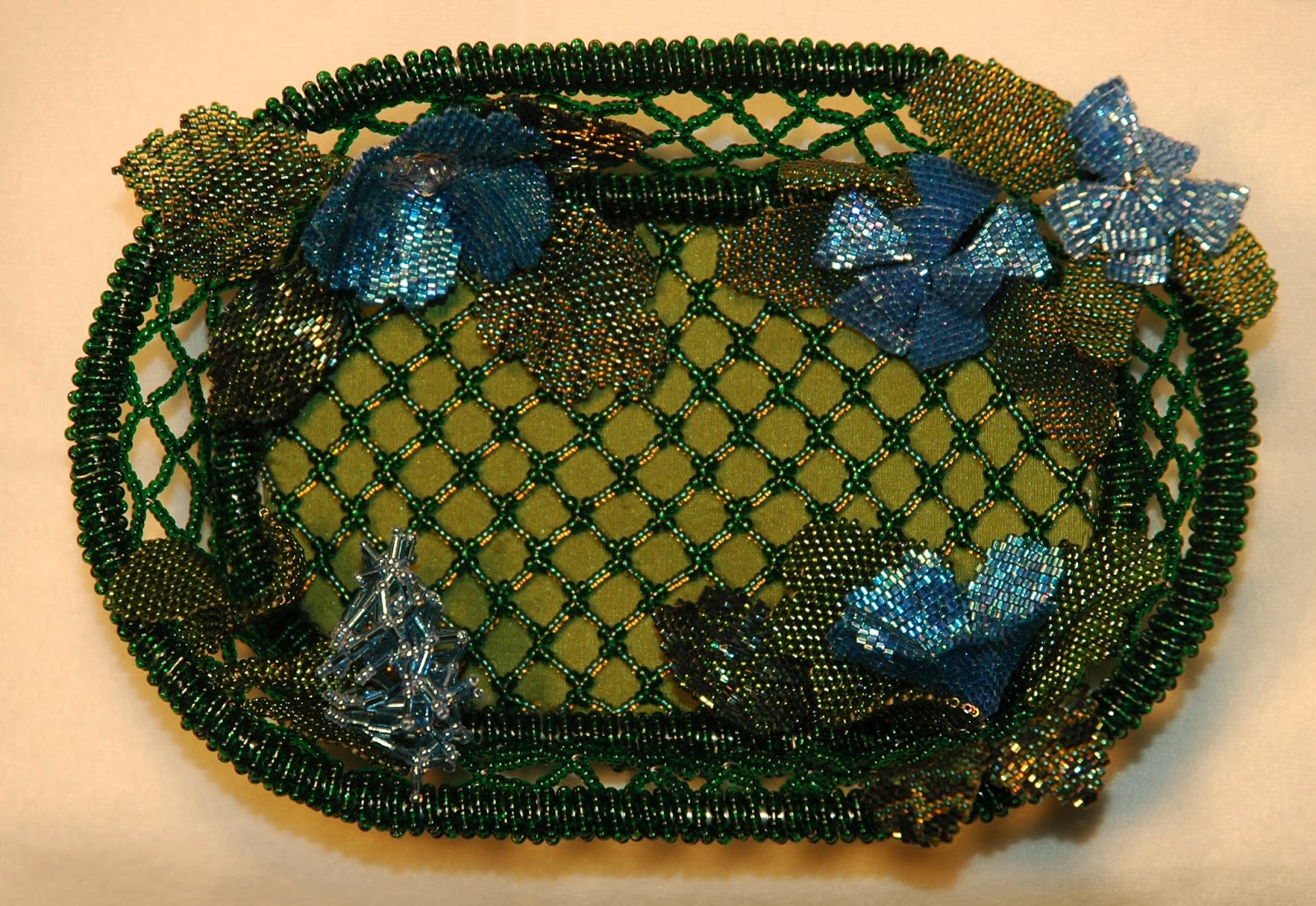 carnations in the upper right corner – were inspired by similar flowers on the MFA basket.  As I worked, I looked at the layout of decorations on the MFA basket, how flowers and leaves were arranged in sprays, the variety of leaves and blooms, and tried to emulate them in my design.  Essentially, modern love expressed in a 17th century form.
[1] http://www.mfa.org/collections/object/gift-basket-48017 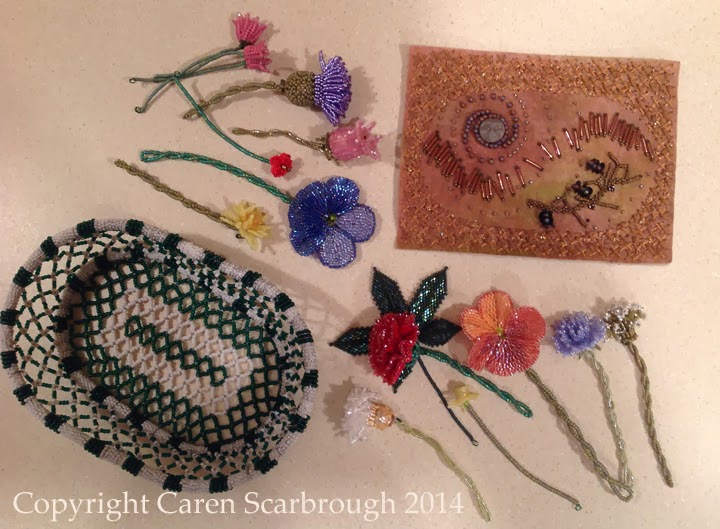 Caren Scarbrough entered into the Modern Multimedia Category with her basket of movable flowers.  Caren said of this entry:

I decided on a basket with moveable flowers so a child could play at flower arranging.  All of the flowers are on wire. The brown piece started as a forest floor for the basket, but I decided it needed a border so it became a mat or a cover if all the flowers are simply placed in the basket.


You can see how her flowers can be put into the basket in multiple ways in the following photos.  I also added a close up of the rose which I really liked!  The folding of a beaded formation was really neat! 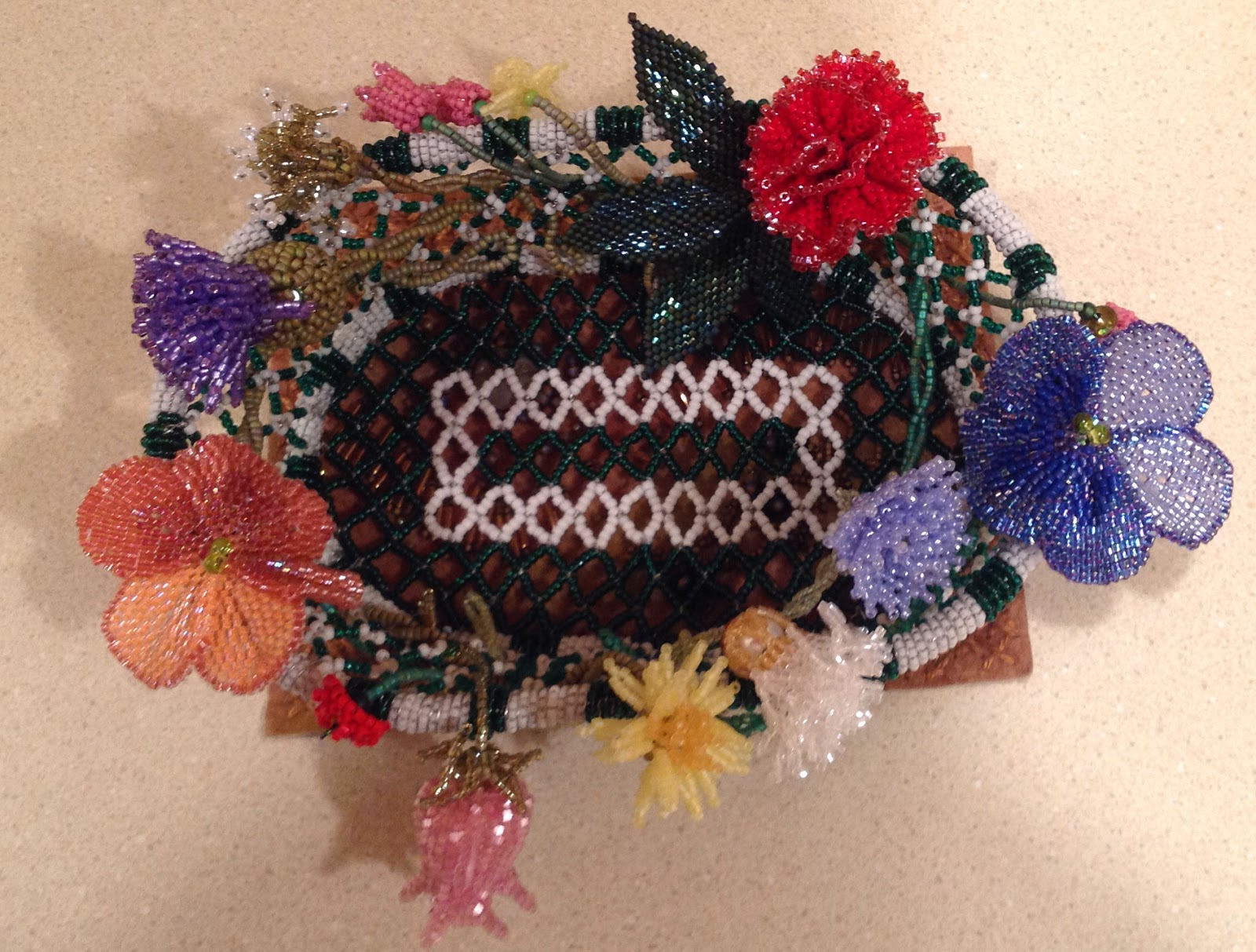 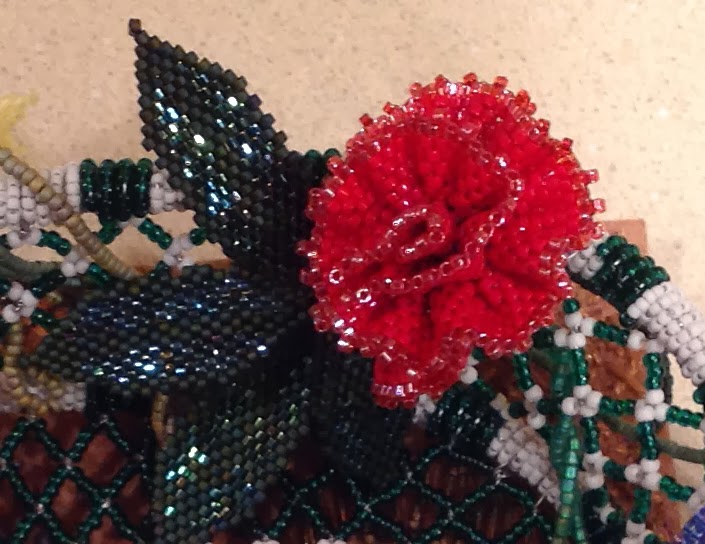 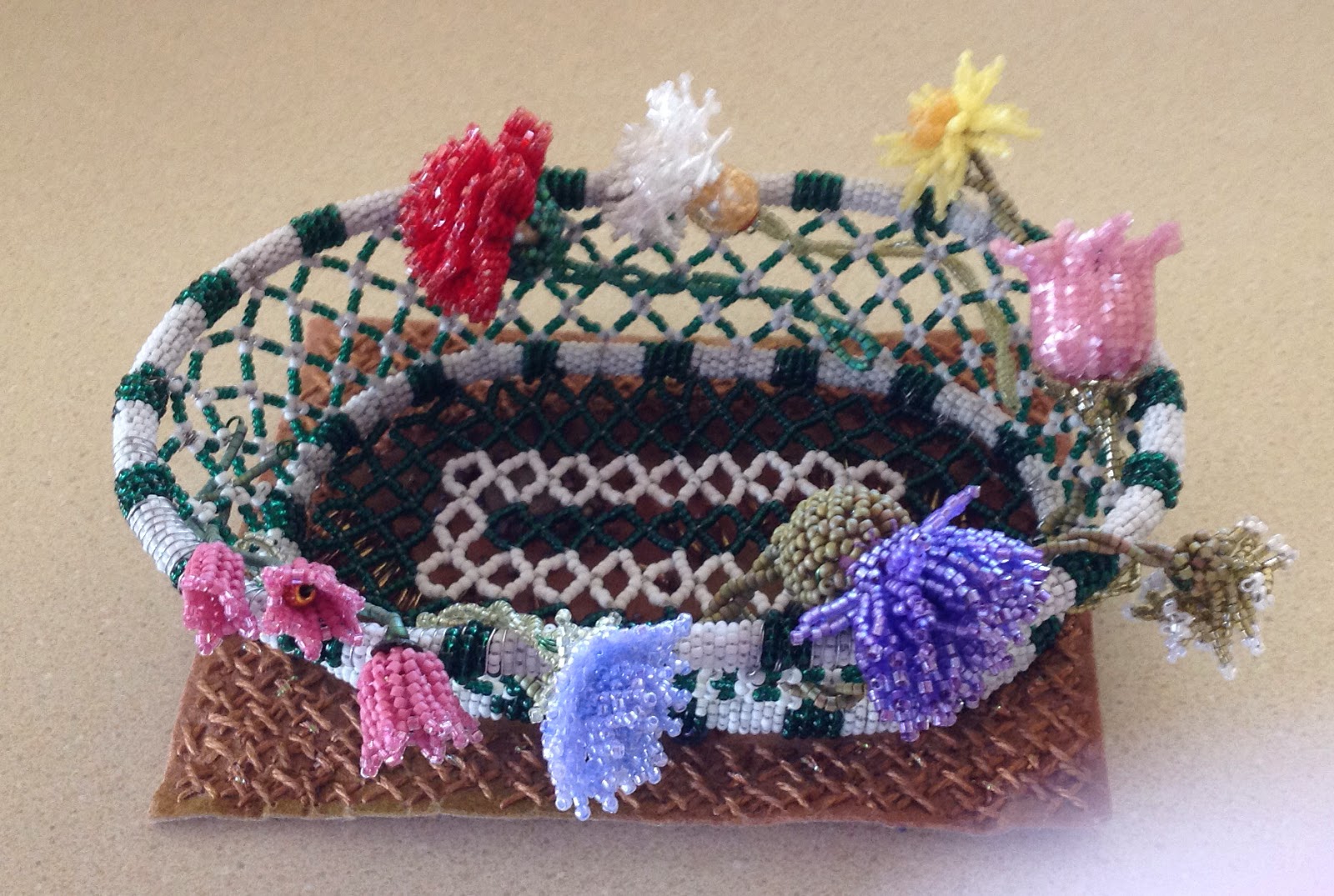