When I established the rules for the contest, I specifically required only ONE of the two rims in the kit to encourage radical creativity and the possibility that someone out there would decide to make a much larger basket and go hog wild!  Well, Rachael Kinnison did just that!  You may have already been following her 'making of' blog which has been so fun to read.  Rachael is a well known doll artist and her work has been included in the Early American Life list of Traditional Artisans.  I know several people like Racheal, artists who when they touch a new media master it immediately.  After you ogle the basket - focus in on the mind blowing Baltimore Album quilt in the background.  Award winning - a finalist at the International Quilt Show in Houston.  I had to look it up.  I can't wait to see her embroidered casket now!

Rachael has won the Flat Casket form with this entry and I know that no one will disagree with me on this decision.  I am going to let her blog and description tell the story behind the basket, but I do have to say that I so appreciate that she kept track of the number of beads and her time.  I can't tell you how valuable those two pieces of information are.  Before the contest was over, the pictures of this basket were being passed around secretly between myself, Rachael and museum curators/researchers because there are insights to be had from her information.  Thank you Rachael for giving us all a datapoint to put the antique baskets in context!

I have collected antique beads since I was in early grade school. I was always drawn to them, but never made anything with them.  The second the read about the beaded baskets in the lesson, I knew why I had collected them for so long.  I saw the Corning Museum basket, and that was it, my mind was made up in a nano second, I had to make that basket~ I had no idea how~so I just looked at the pictures and did it. 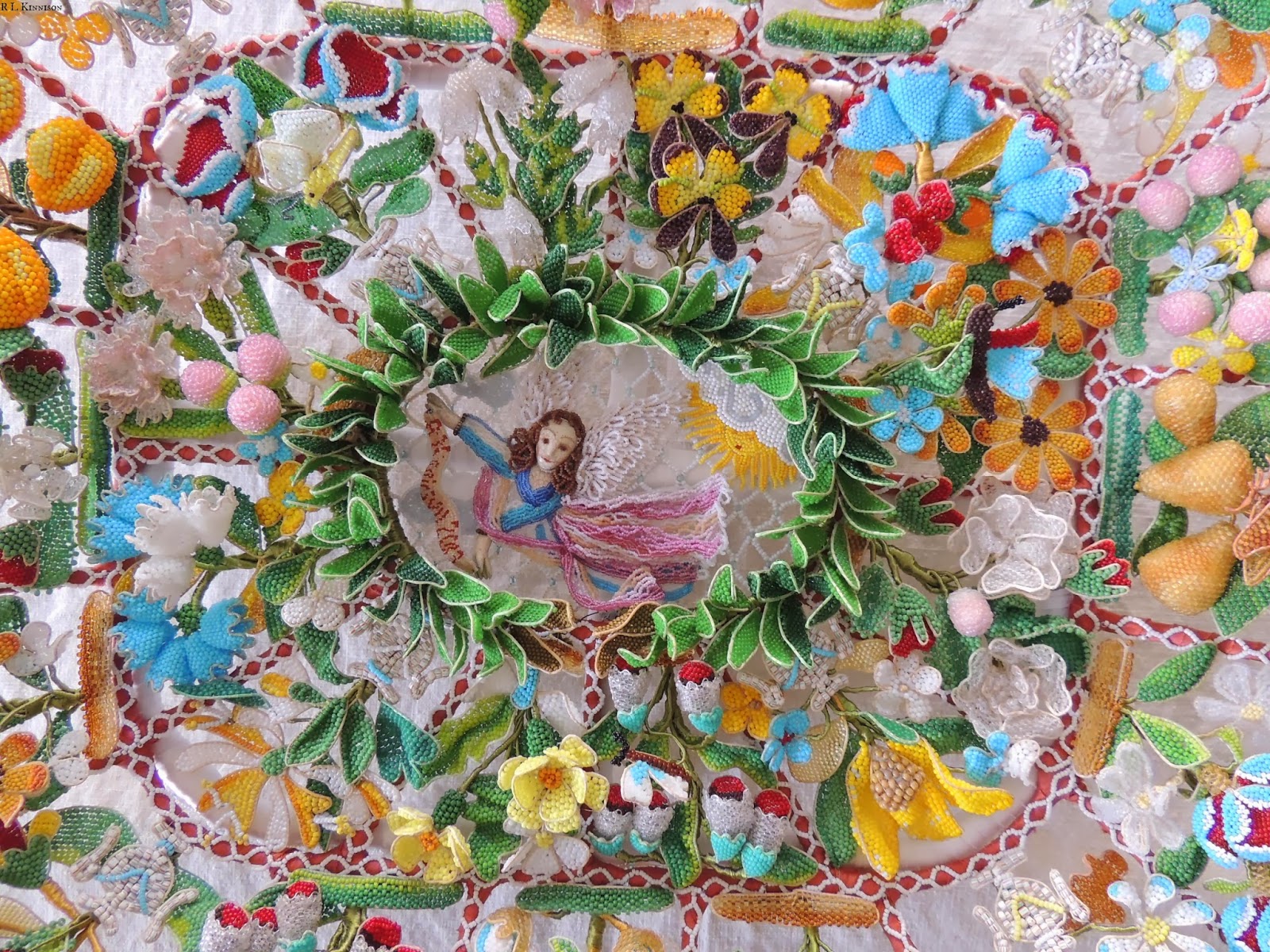 I studied the four photos I have of the basket in detail, and from them, could see that the wire form was wrapped in fabric and then had beads applied over that.  I really liked the tri color wrapping so many of the baskets had, so I incorporated that into my design,  I  matched my colors to the Holburne Museum's basket. 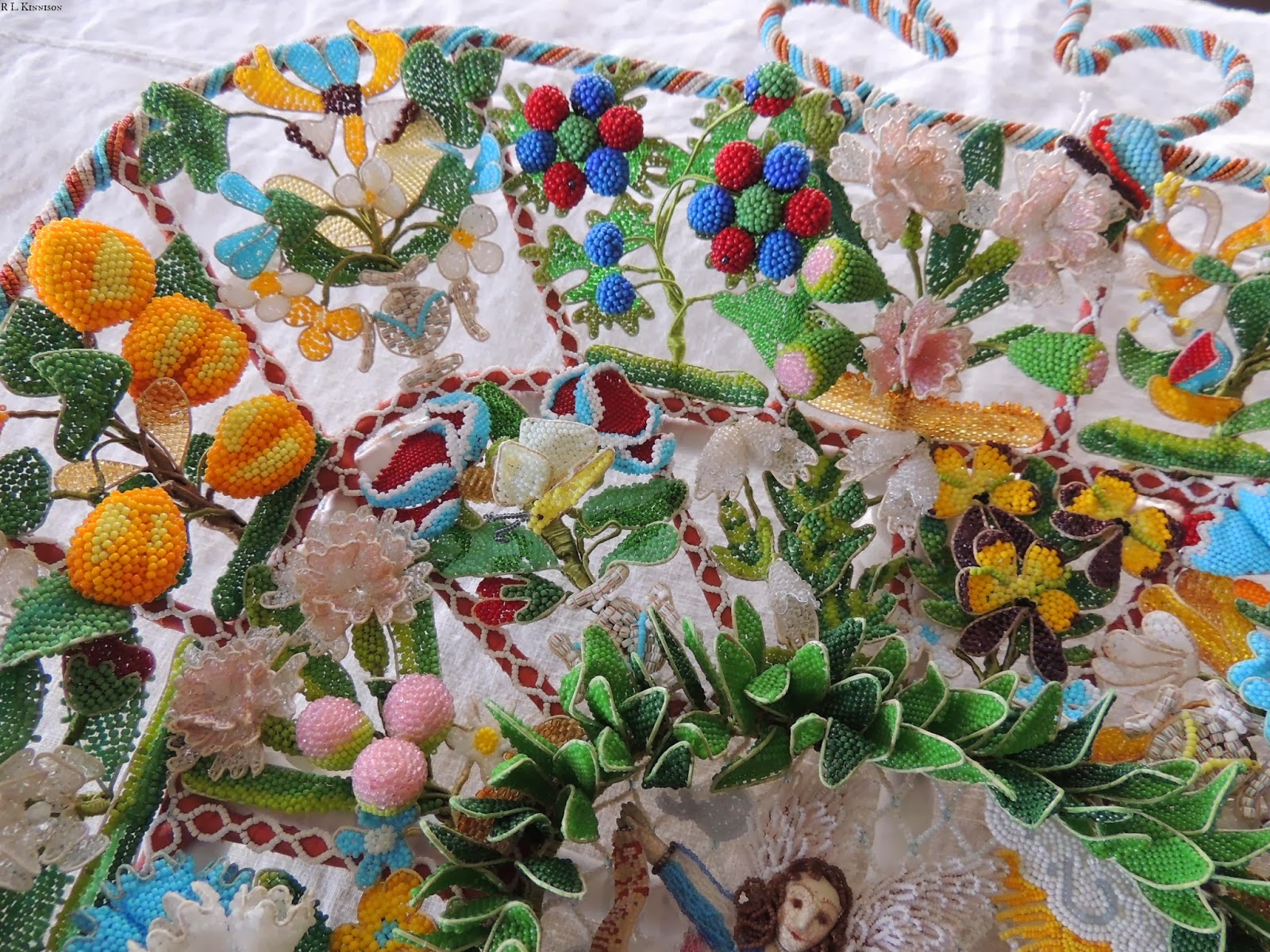 To fill the inner panels, I decided to reproduce the flowers from the Corning basket. Many of them are currently just wire shapes, the beads having been long lost~ so it was a great help actually to see how the shapes were wired. 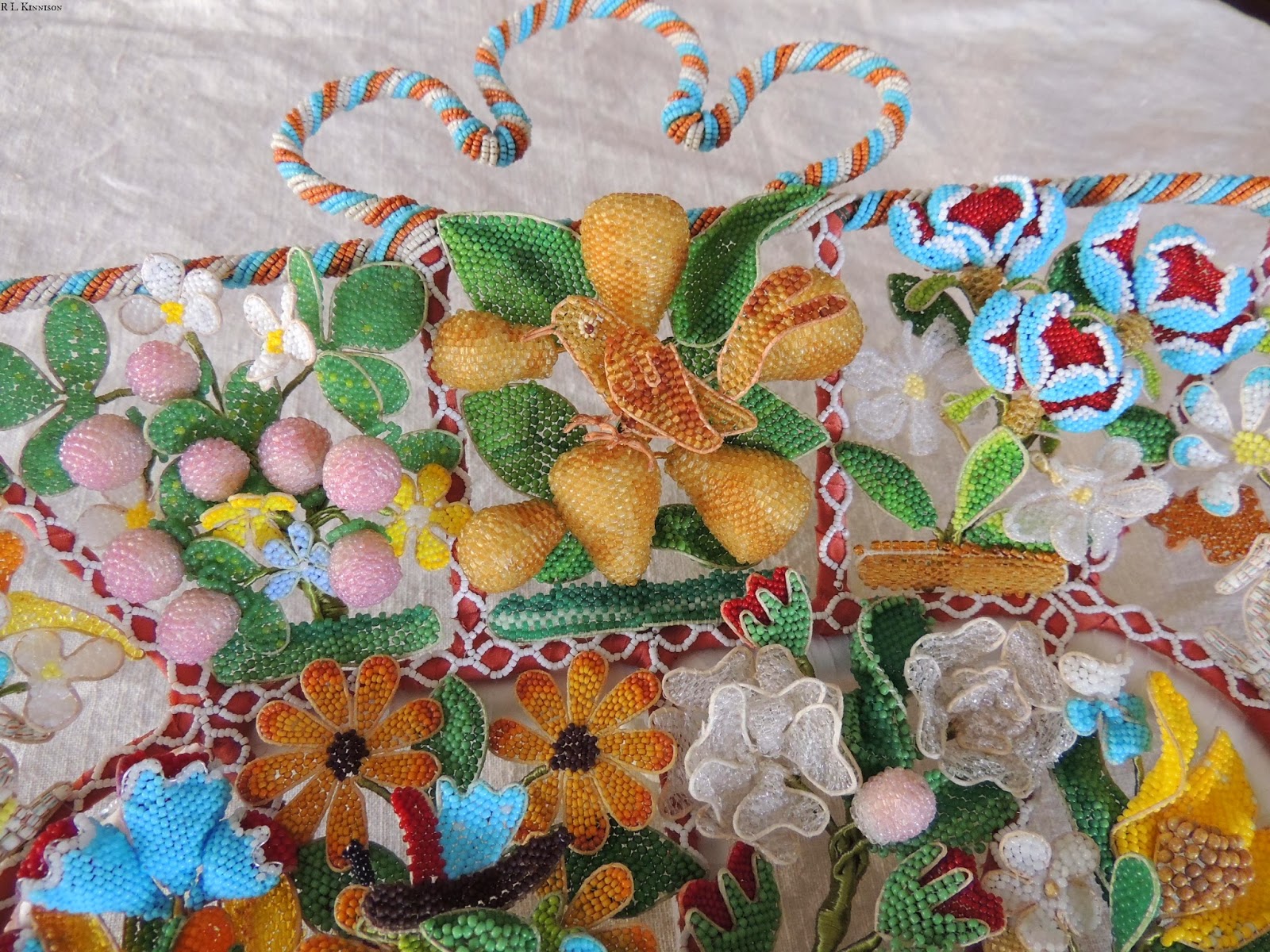 I wanted the basket to have special meaning for me, so I replaced the royal couple in the center with an angel.  For my special One, I took inspiration from a side panel of the Burrell casket.  My angel is done entirely in antique seed beads  less than a mm wide,  strung in single length, more than 50 to an inch. I sculpted her head and hands from mache, and stitched them to a vellum base. Her banner is a bit hard to see, but it reads "R Kinnison 2013" .    She is meant to be tending her garden~ the spokes of the basket are wrapped in Cotswold sheep's wool, then wrapped in silk I hand dyed to match the shade of brown in the top edge wrapping, and to represent the dirt of a garden. The white lattice is the fencing, with all the wonderful flowers within.


There are 5 butterflies, a snail,  a ladybug, bird and 2 honey bees. The ladybug and bees were not on the original Corning basket~ the ladybug is for my four children,  and the honey bees are for my husband, who babies his 2 colonies of  honey bees.  The figures are all wired, then beads woven on.  All the wires are wrapped in soie ovale.  The peaches are woven and stuffed over a vellum shape, while some buds and the pears are woven beads over spun cotton watte shapes.  With the exception of the beads in the outer wrap, and the white of the lattice, all of the beads are antique, (opaque or clear) just like the original. 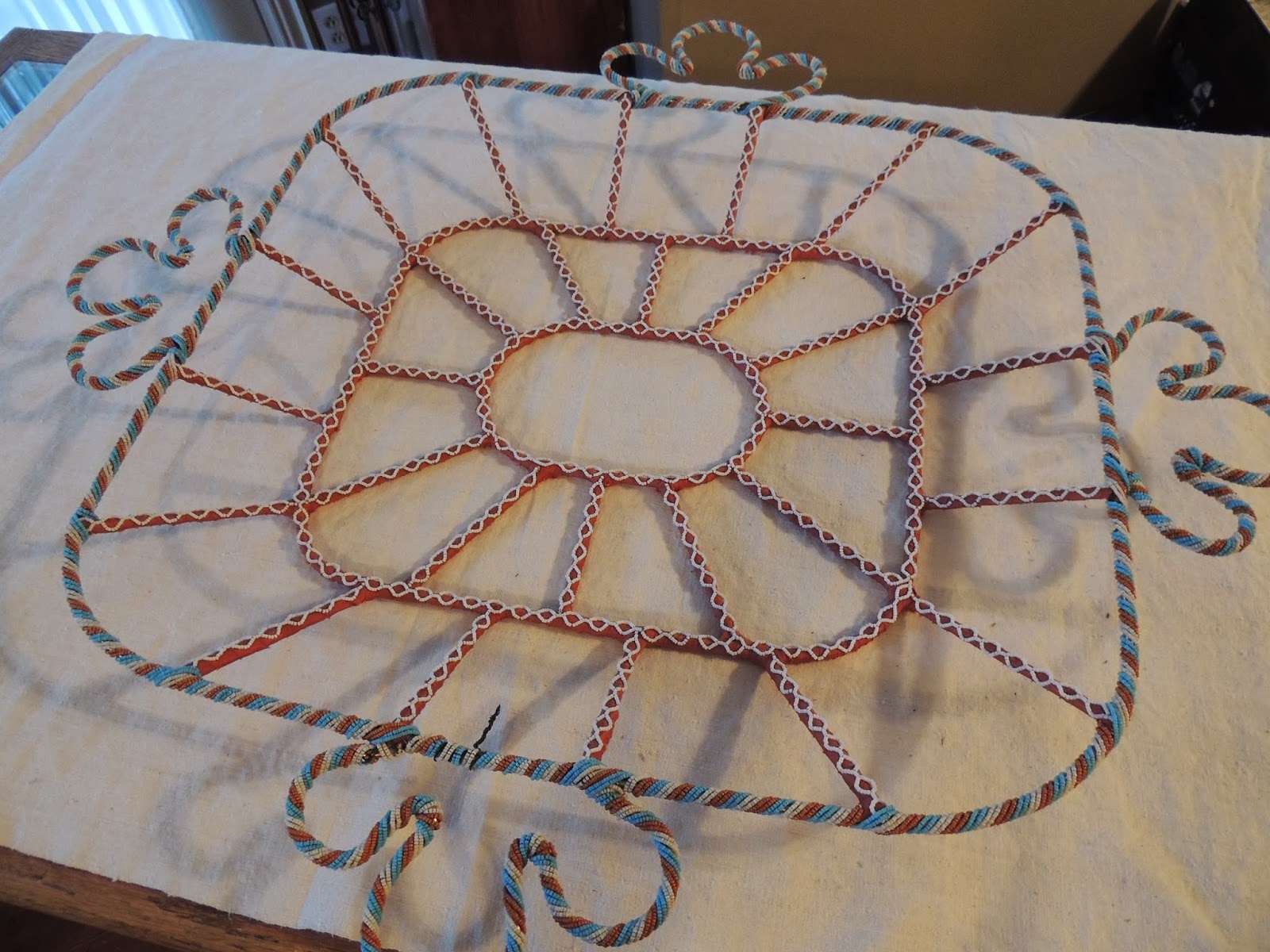 The basket sits up on a separate base to raise it a little, it is made in the same fashion, wrapped in wool and silk, with an applied beaded lattice and beaded feet. 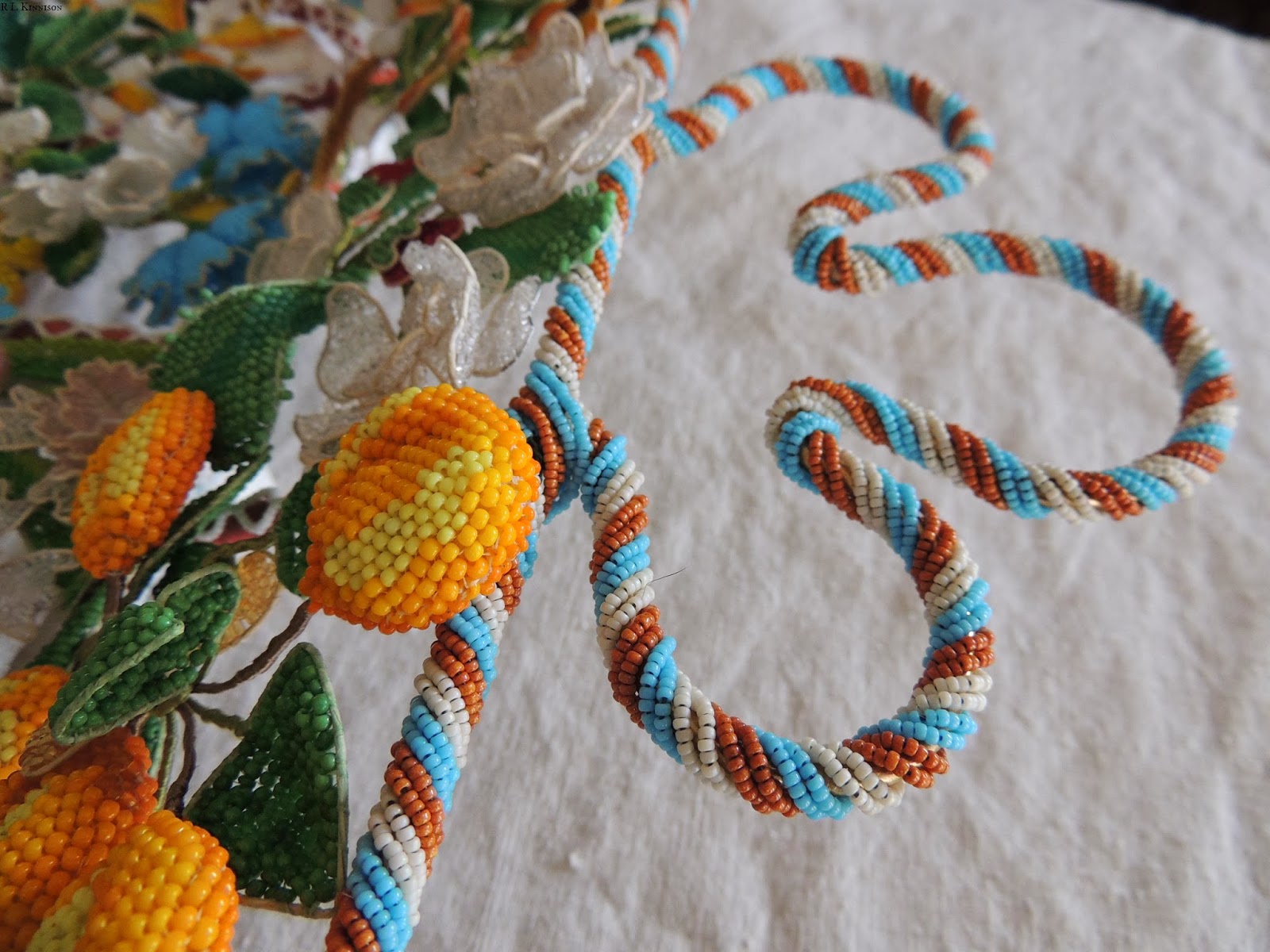 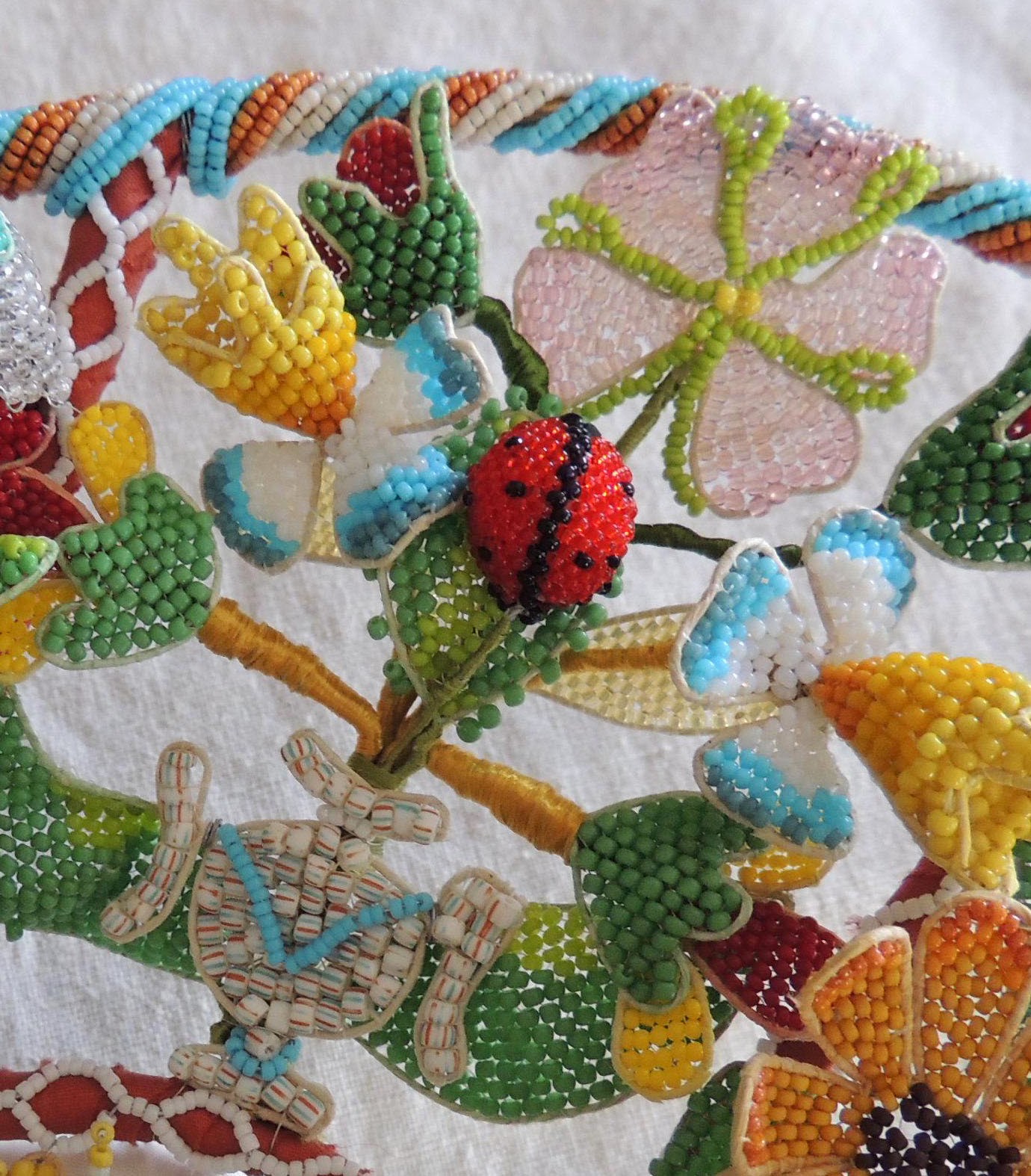 This whole experience has changed me as a person, it has filled a void in my being that is hard to explain. I  hope that my finished basket can accurately represent my passion for this era in time and this sadly long forgotten art form. It has been a total pleasure in making, and I thank you greatly for the opportunity to participate

Rachael has kept track of time and the number of beads in this piece and suggested that I run a mini-contest to figure out the numbers!  I thought that was an EXCELLENT idea!  So did Lamora at Access Commodities - so they are providing prizes!  I will give more info on those tomorrow when I launch the  'how did Rachael do it' contest.  So get figuring!

I encourage you to visit her site to see more about the basket and its making.  And I very much hope that we will see a spate of absolutely wonderful baskets that this entry and all the other entries inspire!  If you make a basket - send me a picture.  There will be more pictures later as a few entries required a bit more elements to finish up and I would very much like to show them in their full glory after they are done.

A huge thank you to everyone who entered the contest and everyone who bought a beaded basket kit to help the Holburne Museum in their purchase of one of the only a few dozen baskets that exist and keep it in the public view.  The contest exceeded my expectations and I personally was so thrilled with the creativity and inspiration of the entries! Congratulations to the winners!